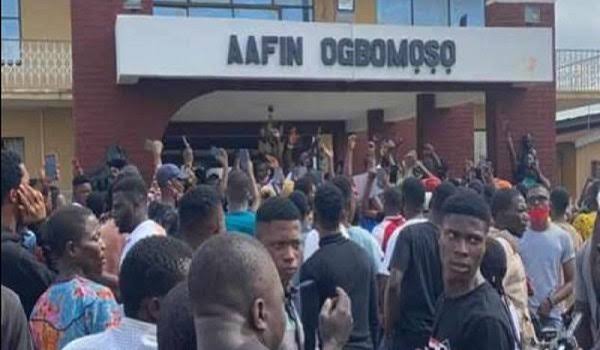 The families of some victims of the #EndSARS protests in Oyo State have filed a criminal complaint before the Oyo State Chief Magistrates’ Court in Ogbomosho against the state police command.

They accused the police of perverting justice in the extrajudicial killing of their sons.

The families, who were represented by their lawyer, Hussein Afolabi, alleged that the Divisional Police Officer of the Owode Police Station, Ogbomosho, Babalola Sarafa, and the Area Commander of the Ogbomosho Area Command, Yemi Oyeniyi, and other policemen fired at protesters which led to the death of four youths: Jimoh Isiaq, Ganiyu Moshood, Taiwo Adeoye and Pelumi Olatunji.

Afolabi, in a criminal complaint filed against Sarafa and Oyeniyi, alleged that the duo perverted justice, an offence contrary to Section 126, Criminal Code Cap. 38, Vol. II, Laws of Oyo State of Nigeria.

In his supporting affidavit, Afolabi alleged that the police compelled the victims’ families to swear to an affidavit against investigation into the deaths.

The lawyer alleged that Isiaq was at a distance away from protesters when he was killed, while Moshood was on a motorcycle when he was shot dead.

Olatunji was said to be playing football with his friends when he was shot, while Adeoye was killed when some youths took Moshood’s corpse to the palace of the Soun of Ogbomosholand.

It was gathered that the corpses of Moshood, Adeoye, and Olatunji were deposited at the Ladoke Akintola University of Technology Teaching Hospital mortuary, Ogbomosho, on October 11, 2020, by policemen from the Owode Police Station.

The affidavit read in part, “Based on my interactions with authorities at the LAUTECH Teaching Hospital, Ogbomosho, on October 13, 2020, the police, who are in this case represented by the defendants, are expected to direct the hospital to conduct autopsy on the bodies of Ganiyu Moshood, Taiwo Adeoye, and Pelumi Olatunji, whose remains were deposited in the hospital by policemen on October 11, 2020. This is usually done by the police submitting the requisite forms to the hospital for the post-mortem examination of the bodies.

“As of October 13, 2020, when I had the interactions with the teaching hospital, the police had not requested the hospital to conduct any post-mortem examination. Acting on the instructions of the victims’ families, I asked the authorities at the teaching hospital to conduct post-mortem examination on the bodies to determine the cause of death and circumstances leading to their deaths.

“The defendants, upon having knowledge of the victims’ families’ interests in conducting post-mortem examination on the bodies of their loved ones killed in Ogbomosho during the nationwide #EndSARS protests, summoned each family to their Owode Police Station, Ogbomosho, and compelled them to swear to an affidavit against an autopsy, investigation into the crimes, and prosecution of any person(s) found culpable.”

The lawyer further alleged that the DPO insisted that he would not approve the release of the corpses unless the families swore to the affidavit, adding that it was after they did the police officer’s biding that he asked the chief medical director of the teaching hospital to release the bodies for burial.

JUST IN: Oyo State House Of Assembly Has Reverse the Suspension On 13 LG And LCDA Caretaker Chairmen