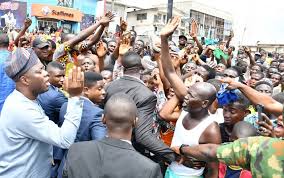 EndSARS: Oyo, Other States Fail To Submit Report One Year After

More than one year after the National Economic Council directed states to set up Judicial Panels of Inquiry to investigate cases of alleged violations of human rights by the now disbanded Special Anti-Robbery Squad and other police units, no fewer than five states have yet to submit their reports to the Federal Government.

Findings by Sunday PUNCH revealed that Oyo, Anambra, Taraba, Bauchi, Taraba and Ogun states are still holding onto their reports, in spite of the fact that most of them were among the first to set up their panels and the position of NEC that the panels should conclude sitting in six months, unless there are genuine reasons for an extension.

Constituting the panels was the government’s response to one of the demands by #EndSARS protesters, composed mainly of youths, who in October 2020, trooped to the streets across many states to demand an end to police brutality, extrajudicial killings, harassment and intimidation of citizens.

Our correspondents gathered that the reason for the delay ranged from funding to bureaucracy.

GSM: LAUTECH Campus, Iseyin As Insignia Of A Promise-keeping Leadership