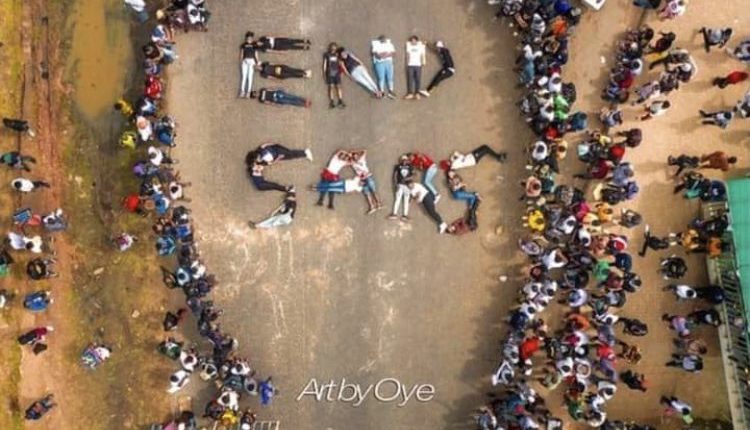 EndSARS: The Melancholic Beats Of A Two-Faced Drum | Wole Adejumo

I entered Akinola Maja Street, Jericho, Ibadan and approached the Superintendent of Police who was the most senior officer on the scene and after checking his name tag, I greeted him and identified myself, in my characteristic manner; “my name is Wole Adejumo, I work with The Street Journal”. I told him I noticed unusual movements and I came to check what was going on. “It is nothing serious, just a routine exercise”, he replied. So I stood by, blended with the already gathering crowd and looked on.

As the officers marched the suspects out of the premises of a petroleum haulage outfit, I brought out my camera and clicked away. I had barely taken the second picture when a hand tried to snatch the camera from behind me. I turned round to face the person and ensure that I didn’t lose the camera. Behold, it was a police sergeant and within a minute, another policeman had joined him.

I kept struggling until it crossed my mind that struggling for a camera with two men carrying Kalashnikov rifles might not be a very sensible thing to do, especially with the many cases of ‘accidental discharge’ that I had heard of. Help was not coming from any of the bystanders. I left the camera and almost immediately, the Sergeant bellowed at me, “sit down there”. Of course seeing that the rifles were no longer on their shoulders but in their hands, my compliance was not delayed.

Right there, I was dispossessed of my phones and voice recorder. Minutes seemed like hours and the two policemen were already accusing me of being a “spy”. They put a call through to their superior officer while I sat there on the asphalt. Fortunately, the phone was on speaker, so I heard the conversation audibly. When the Sergeant reported that they had caught me, the response from the other end was “is it the guy wearing a green shirt and blue trousers? Leave him, he is a journalist”. That was how I got to know that it was the Superintendent at the other end. The Sergeant however gave reasons for which they should hold me. “He is a spy, we caught him taking pictures, sir”, he said. This time, the Superintendent said “don’t mind him, he is a foolish man. Wait for me”.

On his arrival, I was ordered to stand up and move towards the patrol van he rode in. He asked what they took from me. When I told him the items, he looked at the Sergeant and said “return his phones”.

By the time I retrieved the camera from the office of the Police Public Relations Officer later, the pictures had been wiped. My voice recorder was never found! Of course, being an expert in damage control, the PPRO apologized and said they were doing their job just as I was doing mine. He gave reasons we should be friends, especially since we had the same godfather. That was around June, 2010.

It didn’t come as a surprise that the then Superintendent’s name appeared conspicuously on the list of officers rumoured to have been penciled down for reprimand by the Force as a fallout of the Anti-SARS protests. Though the Force debunked the list, it might be an indication that the senior officer in question has always had potentials for controversy.

While I cannot claim to have had an encounter with the now disbanded Special Anti-Robbery Squad (SARS), I have friends who cannot say the same.

Way back in 2003, Tunde Aluko was caught in their web twice. The first was when policemen came and claimed that he and two other neighbours were apprehended at the scene of a robbery and they were in SARS custody. The second was when he stopped by at one of the ‘joints’ on Ring Road to buy cigarettes. Gun wielding policemen came and arrested him.

My friend left Nigeria some months after. Why? One of the SARS officers issued him what seemed like a personal threat. “You know this is the second time they would bring you here. You wear designer clothes, expensive watches and jewelries, yet you claim to be a student. If you are brought here a third time, I will shoot you”, the officer told him. Since his mum, who was the source of the designer clothes and watches was not ready to lose him to an embittered policeman’s bullet; she took the all-important steps of taking him out of the country.

As we already know, SARS is not self-existent; it is a unit in the Police Force. As such, officers in the disbanded unit will be transferred to other units, thus retaining them as members of the Force. They will undoubtedly operate with the same character.

The truth is that the whole Police Force needs to be overhauled. For instance, the officer that shot and killed Jimoh Isiaka during the #EndSARS Protest in Ogbomoso was not from SARS. Gone are the days when the Force enlisted passionate young people. Not a few of the present crop of policemen are doing the job for want of a better choice. That explains why many officers are unhappy when they see someone that appears to be doing well.

The squalor in the Police College has become an open secret and one wonders how officers trained under such squalid conditions are expected to be happy to secure other citizens.
Quite unfortunately, it is not just a police problem. Earlier in the week, a truck parked on what was supposed to be the fast lane at the popular Mobil Junction leading to Oluyole Estate. Not only did the truck obstinately obstruct traffic, some youths were beside it dancing right there on the road. It was just around 6:50 when people were returning from work. They were marketing a certain “bitters” which was relatively new in the market. They rebuffed my efforts to make them realize that they were wrong to have blocked the road. “Motor wey big pass your own don pass here, oga dey go”, some of them told me as they started banging on my car.

It may not be wrong to infer that from politicians to policemen, community and religious leaders; it is with relentless vigour that people use their positions as tools of oppression and enrichment.
That explains why internet fraudsters suddenly became the prime target of SARS officers. Policemen want money and since Yahoo Boys are cashing out illegitimately, police officers have taken it upon themselves to get a piece of the cake.

Who would blame the policemen? The dilapidation in the average police barrack is more than enough to becloud the vision and competence of even the most upright man in the force. Hardly can any officer living in such an environment give peak performance at work. And sadly, years ago, the Police, SARS inclusive became a tool often deployed by big men to harass people and settle scores.

So when SARS started arresting fraudsters, no one bothered to ask whether powers of the Economic and Financial Crimes Commission (EFCC) were being usurped or whether the Police Anti-Fraud Unit had become extraordinarily useless to the point of not being able to handle internet fraud.

Given the same opportunity under the same conditions, many of the #EndSARS protesters and by extension, average Nigerians would fare worse than the people they are protesting against. So, it is not just the Police Force that needs reforms, the government of Nigeria at all levels, and every Nigerian needs to be reformed and re-orientated in one way or the other.

While we look towards ending police brutality once and for all, we also need to look into other forms of abuse that have impeded Nigeria’s progress thus far. For instance, the Manager who will not employ a female applicant unless she warms his bed, the female student who is willing to give sex in exchange for good grades, the lecturer who is willing to aid such student, the civil servant who will not move a file unless he gets a tip and the electorate who sell their votes to the highest bidder are all as bad as the police officers we are all criticizing.

Sir Winston Churchill once said “if you are going through hell, keep going”. The youth have channeled a course and with the assurance that there is always light at the end of the tunnel, the journey into a better Nigeria seems to have only just begun.