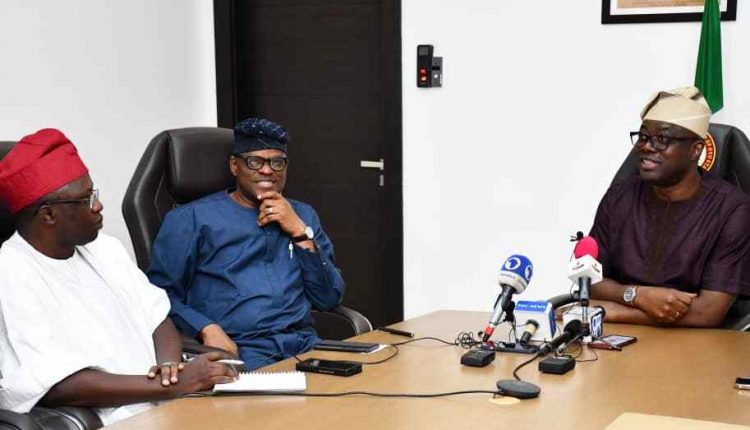 Oyo State Governor, ‘Seyi Makinde, on Friday, urged the Special Reconciliation Committee of the South West Peoples Democratic Party (PDP) to ensure it speaks truth to power in the course of its assignment.

Makinde, who received the Barrister Eyitayo Jegede-led Committee in the Governor’s Office, Agodi, Ibadan, said that the team should be ready to apportion blames where necessary.

The Special Reconciliation Committee is saddled with the task of resolving the crisis in the Lagos and Osun State chapters of the party.

The governor, while receiving the committee at the Conference room of his Office, said that it was necessary to resolve the crisis in the two chapters to ensure that the party goes into the next elections a united force.

A statement by the Chief Press Secretary to the governor, Mr. Taiwo Adisa quoted Makinde as saying that it needed to do its utmost so as to reconcile all aspirants in the just concluded State Congress and Governorship Primary respectively in the two states.

According to him, genuine reconciliation is necessary, while the Committee must explore all avenues that will ensure full reconciliation. He added that the Committee should be bold enough to call a spade a spade, by telling whoever contributed to the division in the two states.

He equally promised to give the Committee all the needed support to have a hitch-free assignment.

Makinde said: “Let me use this opportunity to welcome you to your home. I believe that you are capable of delivering on the assignment given to you. I will also say that this is a good time to really reach out to our people, especially in those two states.

“For Osun, I don’t know if it is not really too late but you have to move very fast to see what you can do. We have an election coming up in eight weeks, and if we don’t get the people together, it will just be a case of a house dividedagainst itself, which won’t be able to stand.

“For Lagos, I personally spent a lot of time with them but, at the end of the day, I believe the outcome of their state congress rather than pull the party together, actually exacerbated the division within the party.

“They still have quite a bit of time because elections in Lagos won’t hold in another ten months. So, I will say that we still have the opportunity to pull all of those people involved together.

“One thing I will also advise is, don’t be afraid to speak truth to power. The NWC put this committee together and if you think they have done more harm to the unity of the party in some of these states, don’t be afraid to let them know so that they can make the necessary amendments. And if, on the other hand, you feel any other person (including me) has influenced things out there without having the correct situation of things on the ground, let us know.

“If we are not able to gain the confidence of Nigerians so much that we cannot put our house in order, you will see apathy in the forthcoming elections. They will just basically stay at home. So, we have quite a bit to do to demonstrate to Nigerians that we are able to unite and bridge the trust gap between the ordinary people and our party. So, we look forward to more governors being produced by the PDP from the southwest zone.”

Speaking earlier, the Chairman of the Special Reconciliation Committee, Barrister Eyitayo Jegede, SAN, said that the committee’s mandate was basically to end all rifts and disagreements with the fold of the party in the region, especially in Lagos and Osun states.

He pledged the sincerity of his members who, he said, are men of integrity and assured the governor that the committee will do a thorough job and make sure true reconciliation of all warring factions is achieved.

“Let me start by thanking you for giving us this privilege to be here as the revered leader of the South West PDP and our party. Our committee is preoccupied with the responsibility of reconciling some contending factors and forces within our party in Lagos and Osun states.

“Our assignment basically will take us to the states but we need to start from here because the zonal office is here and we need to also let you know as the leader and to seek your support. We are hopeful that we will be able to talk to our members.

“We also commend your efforts for being a good ambassador of our party and the many good things you are doing for your people in Oyo State and the management of the workforce. “Interestingly, it is not all the state governments that can pay salaries but I know Oyo State is paying and 13th-month salary, which a number of states cannot.

“There is a lot to learn from you and I hope our governors in other states will be humble enough to access you on how you are able to do these things.

“We believe that the people are waiting for the PDP government not only at the federal level but also in our respective states and part of our efforts is to make this dream come to fruition. We, on our own part, are going for the assignment with a very clean heart. We are going to work assiduously to ensure that our people work together; the need for unity and harmony within the party. If there is no unity, there will be problems and that is why we are taking these pre-emptive steps to ensure there is no division within the family of the PDP.

“This assignment will require your support and input so that our members can look forward to the objective of getting to the Government Houses both in Osun and Lagos as well as some other states. God helping us, PDP is back on a rescue mission and some of us look at the leadership of our governors like you in this zone. We hope that the PDP will come to Nigeria at the center and the South West.”

The Committee had earlier had its inaugural meeting at the South-West Zonal Office of the party, located at Oshuntokun Avenue, Bodija, Ibadan, with members of the Zonal Working Committee in attendance.

South West APC Elders Meeting With Osinbajo, Tinubu, Others Affirm Rights of All Aspirants To Contest