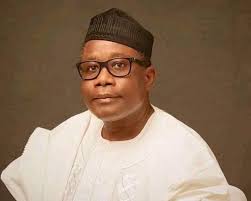 Eruobodo Denies Leaving APC With Adelabu, Say’s He Will Be The Last Person Dump APC

An aspirant for the Oyo South Senatorial District on the platform of the All Progressives Congress in Oyo state, Dr. Olusola Ayandele (Eruobodo) has put paid to the rumours of his alleged defection from the APC even as he warned those behind the circulation of the fake reports to desist or face the consequences of their actions.

Ayandele, the former gubernatorial aspirant of the APC in the 2019 general election, had been duly cleared to participate in the primary election expected to produce the party candidate on May 28, 2022 but he opted out of the contest to protest lack of transparency which he noted and complained about even before the commencement of the exercise which later failed and had to be rescheduled.

The Ibarapa-born businessman told our correspondent in a phone conversation that he remained a progressive and bonafide member of Oyo APC but warned that the party might lose many of its faithful in the coming days if nothing was done to address all the issues surrounding the flawed primaries being conducted to pick candidates for the 2023 general election.

His words; “I have been inundated with calls from friends and associates as well as concerned members of the public who wanted to know the veracity of the reports claiming I have left our great Party (APC) but I can tell you categorically that the report is nothing but unfounded rumour being peddled around by some unscrupulous elements for reasons best known to them. It is true I attended an emergency meeting called by a leading gubernatorial aspirant in Ibadan few days ago but my participation at the moment does not suggest that I am a part of any plot to move away from the APC.

“As a matter of fact, I have not had any cause to jump the ship because what is happening at the moment is not peculiar to the APC as it rains everywhere. If anything, I would be the last person to leave the progressive fold for any other camp because of certain reasons which I don’t want to disclose now. There are pockets of crisis within the party at the moment and there is denying that fact but I would rather stay to look for possible ways of resolving issues than run away. I can’t just be answering the title ‘Eruobodo’ for nothing.

“I am aware some important members of Oyo APC who have been disappointed by the handlers of the party are planning to defect to another party but the truth is that I am not one of them and my decision is personal. In fact, I am already reaching out to the national leadership of the party to quickly wade in and ensure that the imminent implosion is averted because it would definitely spell doom for the APC in general if allowed to happen.” Ayandele stated.

Speaking on his ambition to represent Oyo South Senatorial District in the Red Chamber in 2023, the chairman and chief executive of Olusola Ayandele Foundation said that he was still in the race “but there is no way I can participate in the rescheduled primary election if the fundamental issues we raised last week remain unaddressed. There are should be openness and transparency in the way the entire process would be conducted but some anti-democratic elements within the system feel otherwise, I would not join them in any show of shame.

“We know the number of delegates expected from each of the nine local government areas in our district and I understand the delegates are drawn from the entire population of party faithful from the same district but why would anybody hide the delegate list for crying loud sake? Let them pick a new date for the primary and also make the delegate list available to all aspirants 48 hours to the exercise as prescribed by the law and see how they would have buried all this needless crisis. All we are clamouring for is free, fair and credible exercise. Nothing more.” He added.

Oyo 2023: Why Adelabu Ditched SDP For Accord