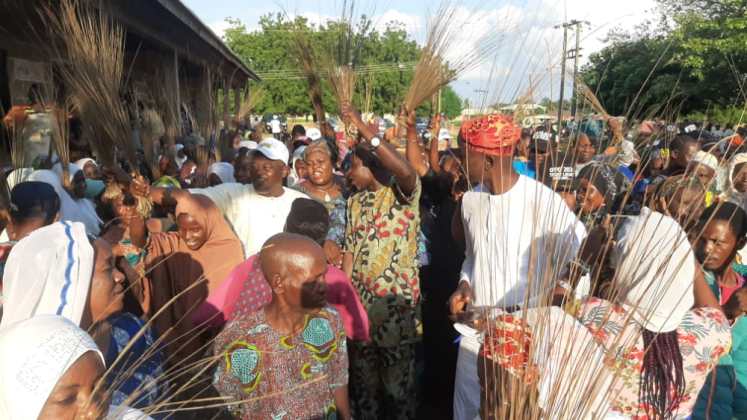 It was plump, drums and fanfare all through on Tuesday 16thAugust, 2022 as loyalists of His Excellency, Engr. Rauf Olaniyan moved from the People’s Democratic Party (PDP) and declared formally for the All Peoples’ Congress (APC) in Igboho, Oorelope Local Government of Oyo State.

The event which took place at the Baptist High School, Oke-Afin, venue of the party’s general meeting, was symbolic and endearing as party faithfuls trouped out in their numbers to express their joy and willingness to vote all APC candidates in the 2023 general election in order to consolidate the success recorded by the party at the centre and to ensure that people enjoy dividends of democracy in the state. The leader of the group, Comrade Adesola Yaqub Tasoolo, a former Caretaker Chairman of Oorelope Local Government and other decampees who expressed their joy on the development described it as long overdue considering their ordeal in over three years of Governor Seyi Makinde led administration. They commended their leader, the earstwhile deputy governor, for his maturity, doggedness and foresight. They passed votes of confidence on him and re-echoed their loyalty and allegiance to his leadership, with a loud unanimous resolve to go with him wherever he leads them and they pledged to work hard for the party to ensure electoral victory for all its flagbearers at all levels in 2023.

They were received by the APC chairman in Oorelope Local Government, Hon. Soliu Maja and his EXCO members alongside leaders, women and youths of the party. The chairman could not hide his joy as he thanked Engr. Rauf Olaniyan and the Distinguished Senator Teslim Folarin for their tireless efforts in the party at all levels. He told the large crowd that he was particularly delighted by the caliber of highly experienced politicians with which he has to work with moving forward. He described Alhaji Mudathir Somope, a founding member of the PDP and the chairman of the party in the Local Government for years, as a highly respected leader and a master strategist and he assured them of a smooth and hitch-free working relationship, while working hard to kick out the tiny remains of PDP in the Local Government and Oyo State in general.

Outbreak Of African Swine, Pigs Disease Reported In Oyo, Other