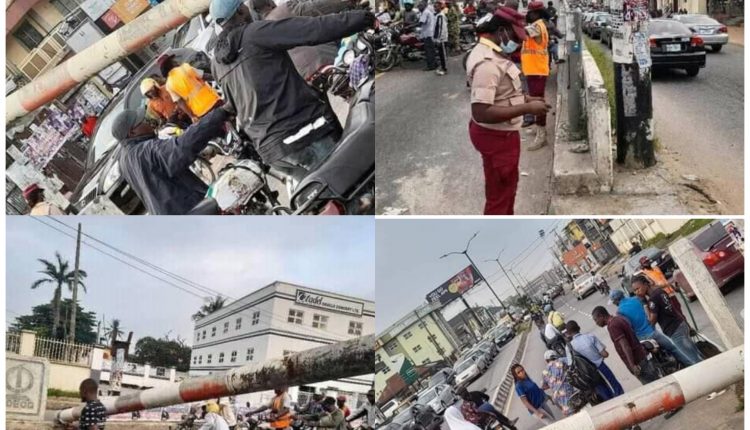 In order to ease the massive traffic logjam that always occurred around the Dugbe-Mokola axis of the Ibadan metropolis in Oyo State and also to ensure that the area is beautified, the administration of former Governor Abiola Ajimobi came up with the idea of constructing a flyover bridge right in the heart of Mokola Roundabout in the city.

Thus, on June 25th, after about two years of construction, the bridge was commissioned by the leader of the All Progressives Congress (APC), Senator Bola Tinubu and the then national chairman of the APC, Chief Bisi Akande and was open for public use on the second day.

However, one main feature of the newly-constructed bridge was that two big iron barricades were mounted at both the inward Mokola end and inward Dugbe end of the bridge which the then government said were meant to prevent heavy-duty vehicles including trailers, trucks, tankers, among others, from plying the bridge.

Since 2013, the iron barricades had been there and nothing had happened to them while truly, no heavy-duty vehicle had been allowed to pass through the flyover bridge as they were only able to pass the adjoining roads.

However, in the morning of Monday, November 15, motorists plying the area and residents alike were shocked to see that the barricade at the inward Mokola end of the bridge had been destroyed as it had fallen apparently due to a heavy-duty vehicle that passed there overnight.

I was heading from Premier Hotel end of the Mokola-Sango highway and wanted to link the Dugbe end through the bridge when I was asked by officials of the Oyo State Road Transport Management Agency (OYRTMA) to either pass through the Sabo Road or be in the gridlock of vehicles heading towards Dugbe.

I asked one of the officials what went wrong and what caused the massive gridlock and I was told the barrier at the other side of the bridge had fallen while they were waiting for government officials to come and assess the situation before anything could be done to it.

I therefore decided to check things for myself and right at the mouth of the bridge was the massive barricade that had fallen down ostensibly due to a heavy-duty vehicle that decided to pass through the bridge probably late in the night.

As of the time I left the area after spending some minutes there, no government officials had arrived to assess the situation despite the fact that one of the OYRTMA officials had earlier told me that they had contacted the state government secretariat about the incident.

PHOTOS: Residents Express Worries Over Deplorable Condition of Their Roads In Ibadan •Call On Govt To Intervene