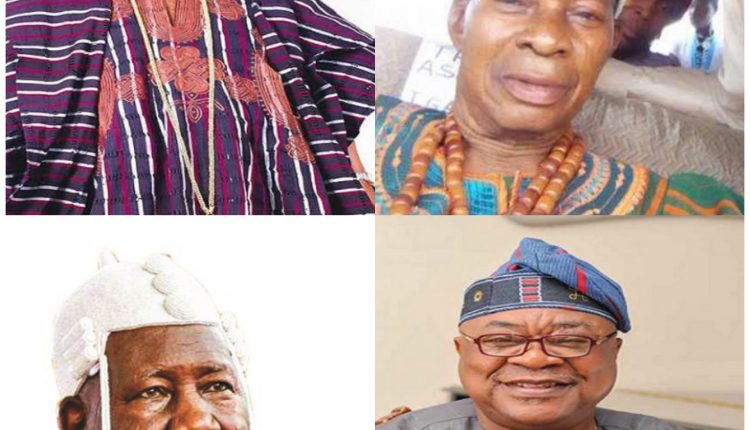 EXCLUSIVE: How Four Oyo Prominent Indigenes Died In One Month

In one month, Oyo State has lost four important indigenes.

Three first-class monarchs and one prominent politician in the State succumbed to the cold hands of death.

The Soun of Ogbomoso passed on last year. He died at 95 after he reigned for 48 years. Ajagungbade ascended the throne on October 24, 1973.

He was born on May 27, 1926, in Ogbomoso to Oba Bello Afolabi Oyewumi Ajagungbade II and Ayaba Seliat Olatundun Oyewumi.

His death came barely ten days after the demise of Soun of Ogbomoso.

Adetunji was born on August 26, 1928 to the family of Raji Olayiwola and Suwebat Amope Adetunji in the Alusekere compound, Popoyemoja, Ibadan.

Adetunji was crowned Olubadan after the demise of Oba Samuel Odulana Odugade. He was the first of 17 children of his parents.

The former Oyo Governor died just 12 days after the New Year. His death came as a rude shock to many. Alao-Akala, who was born in Ogbomosho on June 3, 1950, died at 71.

Alao-Akala was a former police officer and a former Deputy Governor to Chief Rashidi Ladoja.

He became Governor when Ladoja was impeached. He was a candidate of the ADP in the 2019 governorship election in Oyo State before defecting to the APC.