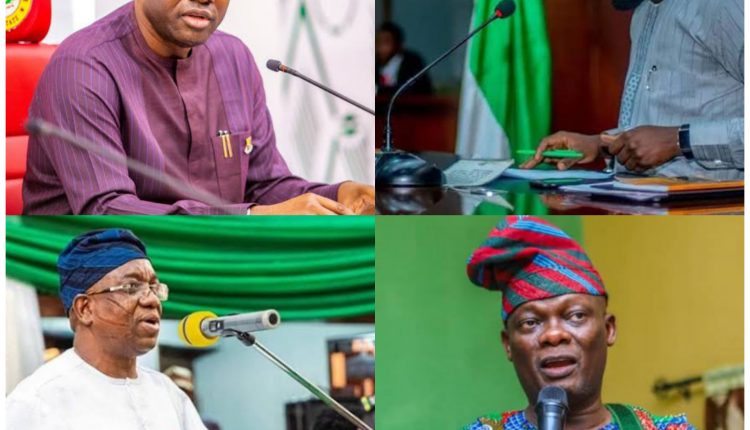 The incumbent deputy governor of Oyo State, Engr Rauf Olaniyan is set to become the running mate to the senator representing Oyo Central Senatorial District and the candidate of the Oyo State All Progressive Congress Sen Teslim Folarin Akéde Ọ̀yọ́ can Authoritatively confirm.

A source close to deputy governor who pleaded anonymity confirm to Akéde Ọ̀yọ́, said “Yeah the whole thing is happening so fast, bearly 72hours after resigning his membership of the People’s Democratic Party (PDP) and announcing that he’s now a member of the Opposition All progressive Congress (APC) i can tell you that he’s been pencil down to be the running mate of Senator Teslim Folarin.

“Oga can’t go there as the number two citizen, denouncing membership of the rulling party as a deputy governor without collecting something tangible, i can confirm to you that Oga, Engr Rauf Olaniyan will be Sen. Teslim Folarin running mate, it’s just a matter of time before the whole thing is revealed.

When asked if the deputy governor will be comfortable with the development he said, sure since things are not working fine between him and the State Governor Engr Seyi Makinde politically, couple with the fact that he has just announced his running mate in person of Barr. Bayo Lawal, I don’t think it’s a crime. Oga saw that coming so he planned ahead. he concluded that a very long time ago, though both of them are now in the opposite side, but they both have a joint mandate till 2023.

Investigation by Akéde Ọ̀yọ́ reveal that Oyo State Deputy Governor Engr Rauf Olaniyan, secretly collected Oyo North Senatorial Ticket of the All Progressive Congress (APC), but was letter promised Deputy slot if he decamp to the opposition party, reasons he did not make it public at the time.

Akéde Ọ̀yọ́ gathered that the deputy governor Engr Rauf Olaniyan may resign by next week, “he won’t want to be the first deputy governor in the State to be impeached, he may humbly resign and retain his omo oluwabi status a Source in the know tell Akéde Ọ̀yọ́.

He further said that, “I’m afraid that if he fails to resign by next week he will be impeached” honestly the process is so easy, PDP have 26 out of the 32 honorable Members in the State house of Assemble, as we speak I’m aware of the fact that, nothing less than 23 Signatures is secured for the process, infact 2 out of the opposition party APC members are in, making it 25 out of the 32 members.

Another Source told Akéde Ọ̀yọ́ that the deputy governor has his plans all map out, but the fact that he can’t hold the state Honorables to the jugular, he’s a smart man, who understands the implications, he will resigned to safe himself.

Another Source said the deputy governor was only delaying plans, so he can perfect plans to his new abode, I pray he play the smart move or else, the story might be brutal to tell.

Akéde Ọ̀yọ́ Can confirm that the Speaker of the State house of Assembly Rtd Hon. Debo Ogundoyin is out of the country as at the time of filling this report, reasons the whole process is delayed, he is rumoured to be in town by the end of this week, while plans are in top gear to effect the imminent political play in the State.