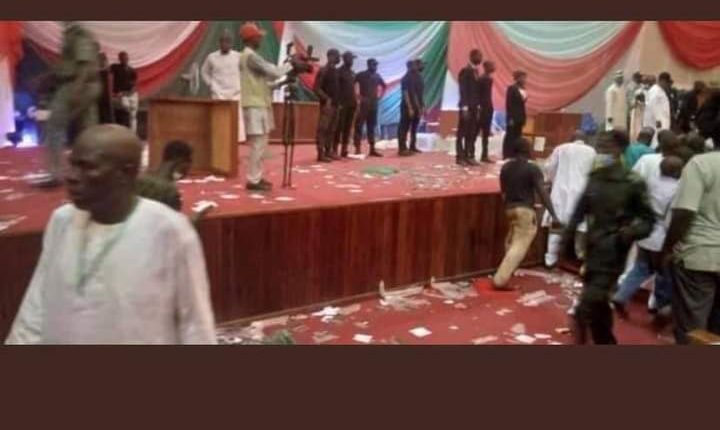 EXCLUSIVE: PDP Elects New Excos Across Six Zone, As Northwest Ends In Crisis, S’West Up For Showdown On Monday

The People’s Democratic Party (PDP) zonal congress still on as some zones have not yet reached conclusion about the outcome of the congress.

The Northwest congress held in Kaduna on Saturday was distrupted by violence as the two factions led by Sen. Rabid Musa Kwankwaso and Gov. Aminu Waziri Tambuwal engagedin brutal clash which led to an abrupt ending of the election without anyone emerging from the congress.

The warring supporters destroyed ballot boxes before voting could start, forcing observers and other officials to flee the scene.

The main subject of the dispute was the position of zonal National Vice Chairman.

Sen. Kwankwaso is at odds with former Minister of Foreign Affairs, Aminu Wali, who leads a rival faction of the PDP in Kano.

Earlier on Saturday, Kwankwaso also accused Mr Tambuwal of meddling in the affairs of the party in Kano as part of preparation for the 2023 presidential race.

“Its unfortunate that Gov. Tambuwal in his opinion doesn’t want us from the Kwankwasiyya faction to be elected for the positions,” the former Kano governor said on BBC Hausa service.

Meanwhile, Gov. Tambuwal dismissed the claim that he’s not in any way meddling in the affairs of the Kano state PDP.

The North Central however had their congress at the state capital of Benue state, Makurdi where 23 Excos were elected to oversee the affairs of the party for another four years.

Announcing the outcome of the election on Saturday in Makurdi, the Electoral Committee Chairman, Dr Cletus Tyokaa, said that all the outgone zonal officials were returned unopposed.

The leaders of the party in the zone, the likes of the former Senate president, David Mark and Senator Bukola Saraki and the governor of Benue state, Gov. Samuel Ortom have resolved to work in harmony to position the party to emerge victorious in 2023.

However, series of disagreement ranging from venue and date couldn’t allow the previously announced date of the southwest congress to see the light of the day, it was later scheduled to hold in Oshogbo on Monday.

The Seyi Makimde and Ayo Fayose led camp haven’t yet found a common ground to resolved as they go into the congress on Monday depth in crisis.

However, both parties have alleged each other of plans to Distrup the process with thugs, Ayo Fayose had warned the police to make sure any personel of the Amotekun operation and park management seen at the congress venue is being arrested and prosecuted, the Seyi led camp had also warned that the ethnic right activist, Chief Sunday Igboho should stay away from the elections venue in oshogbo.

Amb. Emmanuel Injuwa was elected in Boro as the zonal chairman of the Northeast zone of the party and unanimously endorse former governor of the state to represent the zone in the forthcoming National congress.

Of all regions, the Northwest zone still remain undetermined as the Southwest zone goes into the congress on oshogbo with deep crisis.

Ramadan: Look Out For Moon From Monday, Sultan Tells Muslims