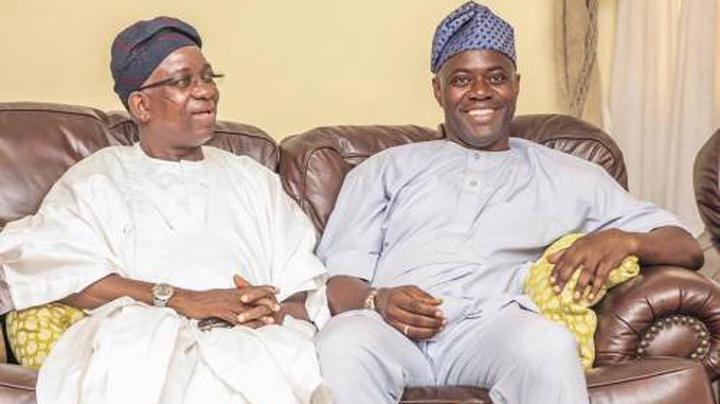 Oyo State may soon be embroiled in legal turmoil as a plot to impeach the Deputy Governor, Rauf Olaniyan, has been hatched, SaharaReporters has gathered.

The move comes 19 months to the end of his 4-year single term as deputy to Governor Seyi Makinde.

Sources told SaharaReporters that the cold war between Makinde and Olaniyan has assumed a dangerous dimension.

Any moment from now, Olaniyan would be impeached by the Peoples Democratic Party (PDP)-dominated Oyo State House of Assembly, a source privy to the move said.

The PDP and the opposition All Progressives Congress (APC) has 26 and 6 lawmakers in the Assembly respectively.

Just last weekend, a petrol station and bakery belonging to the Deputy Governor were vandalised in Ibadan.

There were suspicions in some quarters that the Chairman of the Motor Park Management System in the state, Lamidi Mukaila, popularly called Auxiliary was behind the vandalism.

The vandalised petrol station and bakery are managed by the wife of the Deputy Governor, Prof. Amdalat Olaniyan.

Before then, thugs had, twice on the same day, unleashed terror on aggrieved PDP members who had converged for a parallel congress at Jogor Event Centre, Ibadan.

Though this is not the first time, previous impeachment attempts have been thwarted by the lawmakers who feel Olaniyan has been good to them, a source in the state House of Assembly said.

To make it work this time around, all members have been scheduled to travel to Ghana, a neighbouring West African country.

SaharaReporters gathered that the trip was coordinated by Makinde’s closest ally, 48-year old Seye Famojuro, who hails from Osun and lives in Ibadan.

In Ghana, they will be joined by Makinde who would introduce to them, the need for the impeachment process.

Musah’s preference of Alleluyah to Sunmonu is not far-fetched as the former is closer to Makinde than the latter.

Though both Makinde and Olaniyan are engineers, sources told SaharaReporters that it has been rough since the beginning of the administration.

“In a bid to win the 2019 governorship poll, many people had suggested the names of Engr. Raufu Olaniyan to Engr. Seyi Makinde. Olaniyan was then a governorship aspirant on the platform of the ADC. He hails from Igboho, one of the numerous towns in Okeogun, the second-largest geo-political zone in Oyo State, after Ibadan, the state capital. Parts of the reasons why Makinde considered him was because of his experience as a former top civil servant,” a source told SaharaReporters.

“He was permanent secretary of the Oyo State Road Maintenance Agency (OYSTROMA). Secondly, he is acceptable to the Muslim population beyond Okeogun. And he has a deep pocket, though he doesn’t flaunt it. He is also close to former governor Rashidi Ladoja. All these were what Makinde considered.

“But Olaniyan’s acceptance was at a great cost. His closeness to the former and incumbent governors of Osun, Rauf Aregbesola and Gboyega Oyetola and Kaduna State governor, Nasir El-Rufai, all of the All Progressives Congress (APC) was almost ruined. They didn’t ‘bless’ the move. He accepted it and worked tirelessly to ensure PDP wins. Meanwhile, Makinde promised to, unlike his immediate predecessor, make use of his deputy governor if they won.

“Governor Makinde initially wanted to fulfil his promise but was soon misled by the likes of Alleluyah and co. Initially, Makinde conceded Olaniyan’s Oorelope local government area to him. Alleluyah and Olaniyan are both from Okeogun and he feels threatened by the emergence of Olaniyan.

Calls put across to Makinde’s Chief Press Secretary, Taiwo Adisa, were not answered. A message asking him about the impeachment move and the relationship between the governor and his deputy was also not replied to.