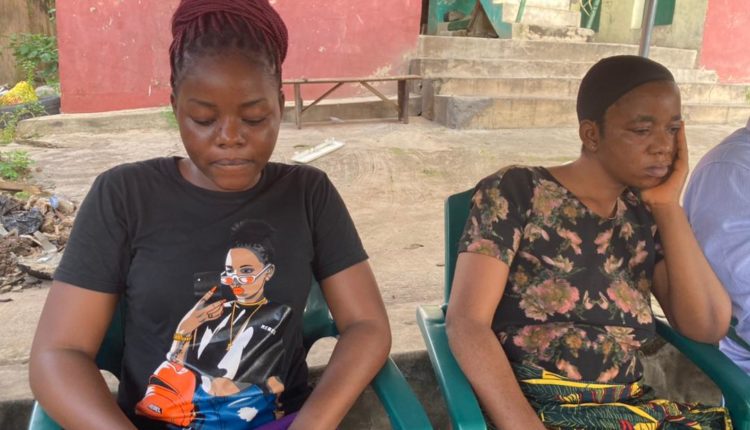 Family of late 15 year old Peter Okafor who was allegedly shot dead by an operative of the Oyo State chapter of Western Nigeria Security Network Codenamed Amotekun Corp has raised alarm over what was described as a deliberate effort to frustrate Police investigations into the gruesome killing of their son.

Addressing pressmen in Ibadan on Monday October 4 over the death of Peter Okafor who was gruesomely murdered, the family stated that the corpse is still at the mortuary because of Police investigations and and the family have thrown into a financial burden imposed on them by the killer of the deceased.

Recall that late Peter Okafor, a 15 year old boy, was shot dead at the early hour of August 18 while on night shift at a printing press around Mokola area and was said to have gone out to buy food from a good vendor near the workplace.

The family of Peter Okafor and youths in the area who witnessed the incident alleged that an operative of Oyo state Amotekun corp shot late Peter Okafor to death leading to outrage and protest which greeted Mokola and State Secretariat areas on August 18 as angry youths barricaded roads along the same axis which prevented vehicular movement for some hours.

Reacting to the allegations, the Oyo state Commandant of Amotekun corp, Coln Olayinka Olayanju (rtd) debunked the allegation maintaining that none of his men was responsible nor involved in the killing of late Peter Okafor urging anyone with contrary proof to come forward with them to enable the security agency carry out necessary action.

The head of the Okafor family, Chief John Idoko in one his remarks to the press urged Oyo Amotekun corp to produce the operative that killed Peter Okafor urging Governor Seyi Makinde of Oyo state to wade in and ensure justice is not just served but be seen to be served.

Almost two months after, the family demanded for justice, Chief Idoko has berated the silence on the path of Oyo Amotekun corp in helping the Oyo State Police Command in their investigation of the matter alleging that neither the vehicle with an inscribed unique number alleged to have been at the scene of the shooting nor the operative who was alleged of the shooting.

While addressing the newsmen on October 4 in Ibadan, the family in a press address read by the Chief of Staff to the President of Ohaneze Ndigbo, Oyo State chapter, Nwagu kenneth Emeka, the family maintainrd that the path of peace the family toed from inception of the matter was in the spirit of public peace and love for the Seyi Makinde led government warning that the case should not be swept under the carpet.

The family maintained that the unspeakable pain and emotional trauma they have been thrown into was unacceptable stressing that the family apart from the psychological impact of losing their son to the gun of a security operative has also been thrown into serious financial burden emanating from mortuary bills f the corpse.

“We know very well that Governor Seyi Makinde means well for the people of Oyo state when the security outfit was inaugurated with the sole aim of improving on the security architecture of the state in order to fight crime and criminality but this evil Amotekun operative who against all known rules of engagement gunned down our son without remorse will not be allowed to go unpunished as it will deter all other security operatives who may feel bigger than the law to engage in extrajudicial killing using state resources.

“We have in the face of all evidences at our disposal concluded plans within the family decided to demand for justice for our family for all the undeserved emotional, mental, and psychological trauma the Oyo State state Amotekun corp has subjected us into through their action and inaction.” The family said.

The family however, expressed gratitude to the leadership of Oyo state House of Assembly for reaching out the family since the death of Peter Okafor said to be the breadwinner of the family of four sisters and mother.

Mrs. Ifeoma Okafor, mother of late Peter Okafor, while briefing journalists on her condition since the demise of her son lamented she and her children have been left to lick their wound without any help or support from any quarter saying “I’m yet to receive any delegations from either government or anybody over the killing of my son.”

ADITU IN OYO TOWN: As 100-Years Igi Odan Resurrect After It Fell Down During Rain Fail, Reportedly Killing Four Persons(VIDEO)