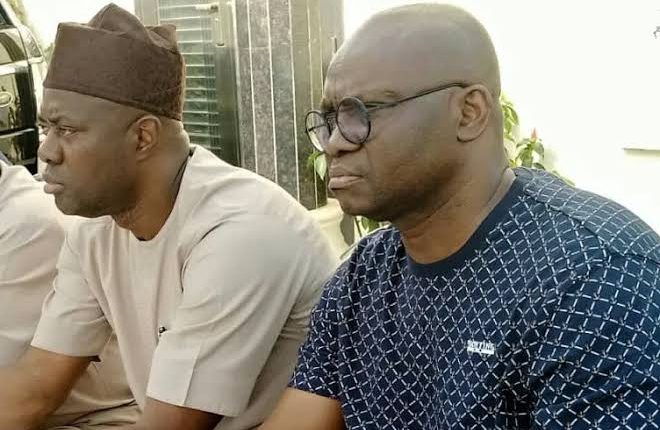 Former Governor of Ekiti State, Ayodele Fayose, on Wednesday, warned the Governor of Oyo State, Seyi Makinde, to stop disrespecting him or he will “work against” him (Makinde).

“If Governor Makinde continues to disrespect me, I will work against him,” Fayose stated on a PUNCH Live interview.

Of late, the leadership of the South-West arm of the Peoples Democratic Party has been embroiled in crisis with Fayose and Makinde at the centre of the ruckus.

Makinde, a first term governor, is the only governor of the Peoples Democratic Party in the South-West zone while the other five states in the region are ruled by the governors of the All Progressives Congress.

Speaking on Wednesday, Fayose said he was amongst party chieftains who worked in 2019 to ensure Makinde emerged the winner of the governorship election in Oyo.

Makinde is constitutionally permitted to run for second term in 2023 but Fayose warned him to retrace his step of he will work against his re-election.

The ex-governor of Ekiti, therefore, urged Makinde to speak out if he has anything against him.

Fayose stated, “When Makinde was to contest, I was the one that presented the flag to him and a red pen. It is a higher authority that hangs your rank, a senior officer hangs the rank of a junior officer, that means he saw me as a leader at the time I was giving him the flag at Ogbomosho.

“It was Governor (Rasheed) Ladoja that was holding the structure that we gave to him (Makinde), I was the only sitting governor at the time. I had powers to influence it negatively. Are you telling me the man that gave you red pen has suddenly become your enemy? If he has anything against me, let him say it. Governor Makinde should take it easy.

“When they were contesting election in Oyo State, I was the one giving him information about the senatorial election. I never slept all night. In his own election, I was with him in Ibadan. If he disrespects us, we will tell him that we have capacity to… I am not his mate.

“If he wants peace, he should stop that nonsense, I say it again nonsense. I mean every word I am saying. I’m a responsible Nigerian. If we were born in the same family, I will be older than Governor Makinde by 10 years even if I was not governor. I should be respected. I am a respectable figure in this country, forget any other story any other politician may say.”

“Even when I was supporting Governor (Kayode) Fayemi in Ekiti, I told them I can never join APC in my life. It was Governor (Segun) Oni that disrespected me and I worked for Governor Fayemi. If Governor Makinde continues to disrespect me like this, I will work against him. I don’t operate underneath; you know where you are with me. If Governor Makinde wants to hear the story of how he became governor, I will tell him,” the ex-governor added.