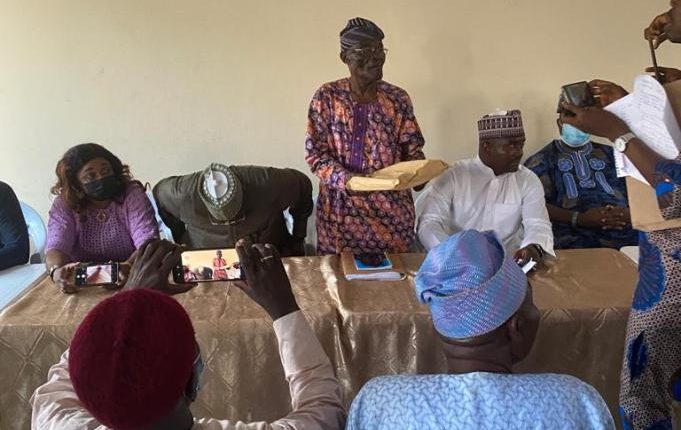 The caretaker chairman and leader of All Progressive Congress in Oyo state, Chief Akin Oke has raised alarm after detected that the list of the delegates for tomorrow’s congress has been falsified.

Oke, the outgoing chairman of Oyo APC alleged Gambo Lawan of bringing to the state a doctored delegate list which is totally against the harmonized lists prepared by the concerned party leaders in the state.

According to Chief Akin Oke, “ This afternoon, the All Progressives Congress (APC) in Oyo State held a Stakeholders meeting on the State congress scheduled for tommorrow 30th October 2021..

It is important to note that Alhaji Lawan Gambo after the Ward congress addressed the press and asserted that there was no parallel congress in Oyo State. The Chairman of the Local Government Congress, Mr Hilary Adamu also addressed the press after the local government congress and noted that there were no parallel congresses in the 33 local government areas of the state. The assertions by the two chairmen confirmned the success of the harmonization efforts that produced the consensus lists.

It therefore remains questionable where and how the results handed over to me by Alhaji Gambo today was generated.

I have been bombarded by critical stakeholders and members of the party across the state over the authenticity of the result. I have communicated the reaction of the party members to the leadership of the party in Abuja. I am also under immense pressure by the member of the party over the fate of the party congress schedule for tomorrow.

While we are assuring the whole world that we shall do everything lawfully possible to resist the evil attempt by some unscrupulous elements to throw our dear party into unnecessary crisis, I use this medium to appeal to leaders and members of our great party to remain calm and let us work together to manage the tense situation in the state. It is my conviction that the party shall get over the present challenge more united and stronger.

Why Oyo APC State Congress May Not Hold Today As Schedule