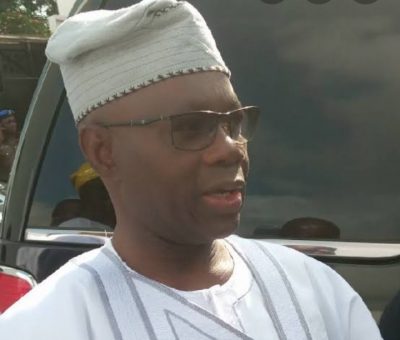 Senator Kola Balogun has described as a mere falsehood and cheap blackmail an online attack that he is an under-performing senator who has no business being in the Senate.

One Comrade Adedokun Sunday, from Eruwa in Ibarapa East Local Government Area of Oyo State, in a report published by a blogger, had challenged Senator Balogun, saying he does not worth being a senator.

“The performances of Senator Kola Balogun at the upper chamber of the legislative arm is (sic) not worthy of being a senator of Federal Republic of Nigeria.

“Amidst the three senators we have in the state presently, he’s the least performing figure. Should we agree that inexperience is cogently undermining the better performance of that senator.

“The senator has been underperforming, and also neglected the people of Ibarapa in his administration (sic),” Sunday had claimed in the report.

However, Senator Balogun, who represents Oyo South Senatorial District, in a release by his Special Adviser (Media and Publicity), Mr Dapo Falade, said the allegation was coming from a frustrated blackmailer.

He said he would have chosen not to respond to the allegations, but he had to react in order to correct the false narratives being spread by somebody whose name is Asiwaju Omo Boboye but chooses to call himself Comrade Adedokun Sunday.

Senator Balogun said his response would be apt, as Omo Boboye had sought for personal help and also sent several messages to him, thanking him for all the projects he has been facilitating for the people of Oyo South Senatorial District.

“I don’t want to get involved in dirty exchanges with a person who has been seeking for personal favour from me. Why should I respond to a man who had, at various times, acknowledged what I am doing for my people in Oyo South Senatorial District?

Balogun said Nigerians can easily recollect that no sooner was he pronounced the winner of the keenly-contested senatorial election in 2019 than his opponent instituted various litigations challenging his victory.

“These litigations consumed the larger part of the first six months of my assumption of office as an elected senator of the Federal Republic of Nigeria.

“As if this was not enough distraction from the performance of my legislative duties, the COVID-19 pandemic threw a sudden catastrophic spanner in the wheel of all the planned programmes of action for my district.

“However, in spite of all the distractions, both natural and human, I still ensured my constituents enjoyed the dividends of democracy, even prior to the COVID-19 pandemic, during and after,” he said.

Senator Balogun listed the following as some of the projects and programmes he had facilitated for Oyo South Senatorial District:

Facilitation of N50 Million capacity building programme for 45 youth and women selected from the nine local government councils of the district in the art of film-making and business, held at Alice Place, Ibadan in February, 2020 in collaboration with the Nigerian Film Corporation, Jos.

Facilitation of N50 million Capacity Building and Empowerment on Agricultural Entrepreneurship for 100 youths and garmers in the nine local government councils of the District, held at the IAR&T, Moor Plantation, Ibadan 19th-21st January, 2021.

Facilitation of over N350 million COVID-19 Loan to over 450 different trade groups, big markets, members of the press inclusive of the Ohaneze Indigbo traders in the District between June and August, 2020.

Facilitation of the payment of Federal Government N30,000 each Survival Fund to 434 tradesmen and Artisans in Oyo South Senatorial District in June, 2020 totalling N13.02M.

Facilitation of the payment of N20,000.00 each palliative grant of the Federal Government to 100 women in the District in February 2021 at the State Secretariat, Ibadan, Oyo State totalling N2M.

Facilitation of payment of N20,000,00 grant to empower one thousand 1,000 women and youths in Oyo South Senatorial District through the Federal Ministry of Youths and Sports Development via beneficiaries’ personal accounts totalling N20m.

Facilitation of N14m grant provision to market men and women in Oyo South Senatorial District paid via Nigeria Prisons Micro-Finance Bank in the month of February 2021 through the Small and Medium Enterprises Development Agency (SMEDAN).

30 Solar Powered Street lights were provided in Oke-Aremo, Agala Estate, the UCH and the University of Ibadan all in Ibadan North Local Government.

A completed block of two classrooms with Toilet, Office, Store and Solar Powered light and other facilities at Oje-Igosun Grammar School, Ibadan North LGA. Already handed over to UBEC who in turn had handed it over to Oyo SUBEB.

Provision and Installation of 300KVA electrical transformer and accessories at Ashi Community in Ibadan North Local Government (protected with fence and gate).

Provision and installation of 300 KVA electrical transformer and accessories at Fagbamila Community in Ibadan North East (fenced with gate).

Provision and installation of 300 KVA Transformer with Accessories at Ogungbade Area of Molete in Ibadan South West Local Government of Oyo State (properly fenced with gate).

Provision and installation of 300 KVA Transformer at Arise Area of Iddo Local Government.

Provision and Installation of 300KVA Transformer and Accessories at Alatere Community of Iddo Local Government.

Construction and completion of one block of three classrooms at Community Primary School at Itabo, Lanlate at Ibarapa East Local Government.

Construction and completion of one block of 3 classrooms at Okusehinde Primary School, Aremo, Ibadan North East.

Rehabilitation of the Oke-Oba Road to the Expressway at Eruwa, Ibarapa East Local Government.

Construction of bridge and Rehabilitation of Odo Eran road at Igboora in Ibarapa Central Local Government.

“On April 15th, 2020 there was an outbreak of massive fire incident at the popular Dugbe Market. Even though I was not around, but the moment the sad news reached me, I directed my District office team to visit the place..I donated the sum of One Million Naira to the traders for a start.

“On a similar note, I have donated cash in support of many communities and associations across the District to assist self helps projects initiated by landlords associations and others.

“Even though the Oriental Foods Industry Limited located at Kilometre 14, Ibadan-Lagos Expressway Ibadan was outside my District, a distress call by the Management of the industry was taken up with seal to forestall imminent closure of the milk producing industry with a staff strength of close to five hundred employees.

“I have been pursuing, in collaboration with the executives of the Central Council of Ibadan Indigenes (CCII), the matters relating to the creation of Ibadan State from the existing Oyo State.

“I have stood up stoutly against the recent invasion by midnight and in the absence of the traders of the Bodija International Market, Orita-Merin and Oja-Oba Markets in Ibadan, by men of the Customs from Ikeja Unit in Lagos who had carted away thousands of Bags of Rice, Millions of Naira, Gari, and Vegetable Oil on suspicion that the items were imported.

“Following my presentation of their petitions to the leadership of the National Assembly, the House Committee on Ethnics took it up
and brought both the Customs and the traders face to face.

“Today the locked up shops had been opened for the traders by the Customs and efforts are on-going for the return of their products.

“I have also visited and identified with the traders at Araromi, Agodi, Sparte Parts Market in Ibadan that got burnt overnight in May 2021.

“I have invited the leadership of the National Emergency Management Agency to the market and together we decided on what steps we needed to take to provide reliefs for the traders. I have done same for Gbaremu Ijokodo and Mammy Markets in Ibadan.

“I have embarked on the provision of relief materials for my constituents during the COVID-19 pandemic and after as well as food items and cash gifts to my people during major religious festivals.

”I have assisted some indigenes of the Districts who were owed large sums of money by federal agencies after the completion of their contracts, executed before the commencement of my tenure.

“But for the various crisis confronting the Federal Government, quite a number of our youths who had been slated for employment at the Federal level would have resumed.

“As tight as it were, a handful of them have been lucky to secure employments through my efforts.

“In response to the organisers of the yearly beauty pageants competition in Oyo State, I have donated a car and reasonable sum to the contest just to ensure we make our youths happy.

“My District office have been besieged by parents seeking admission for their children at both the Secondary and Tertiary Institutions of learning in Nigerian.

“Quite a handful of such requests were attended to promptly and admissions were secured for them through my intervention.

Maltreatment of Nigerians Abroad: Minister of Foreign Affairs Has Been Surmmon Before House of Rep—Akande