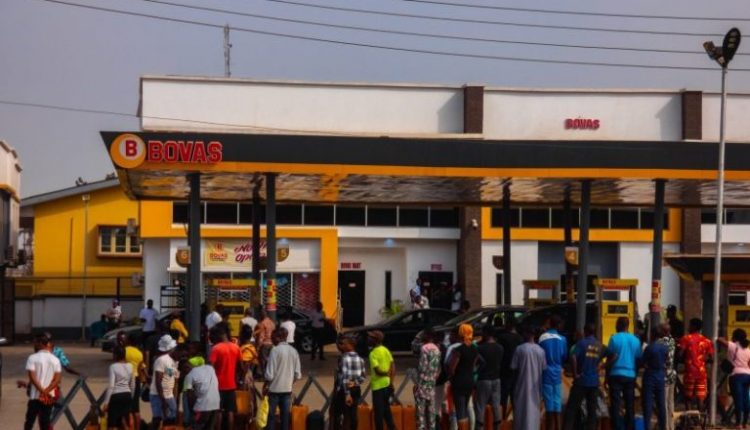 There are insinuations that the ongoing war between Russia and Ukraine may further prolong the over three-week scarcity of Premium Motor Spirit, popularly called petrol, in Nigeria, as bulk of the refined products coming into the country from the warring region and its adjoining areas, are likely to face some delays.

Reports have it that traders who supply Nigeria with refined petroleum products might experience delay to the deficit in the supply of crude oil cargoes from the Nigerian National Petroleum Company Limited.

Nigeria as a country through NNPC, imports refined petrol into its ports using contractors or traders through its Direct Sale Direct Purchase scheme.

Under the scheme, the oil company provides crude oil to its trading partners, who in turn supply the NNPC with refined products worth the volume of crude received from the national oil company.

However, both at the oil firm and among traders according to Punch, stated on Sunday that Nigeria through the NNPC had a deficit of about 17 cargoes in its DSDP obligation due to low oil production.

This, they said, could further prolong the fuel scarcity situation being faced nationwide, except something drastic such as the complete deregulation of the downstream oil sector was implemented.

They also noted that the Russia-Ukraine war might worsen the petrol supply situation in Nigeria as products could be hindered from leaving refineries in the region on schedule.

Nigeria imports its refined petroleum products, as its refineries are currently dormant.

“What we face now could be described as a perfect storm, which is when many things go wrong at the same time. We have a fundamental problem, but that problem happens at a time that other things happened and so it aggravates everything,” an oil trader with the NNPC, who pleaded not to be named due to the sensitive nature of the matter, stated.

The source added, “Now, Russia has attacked Ukraine. What is the impact of Russia’s attack of Ukraine on Nigeria? Russia is an oil-producing country, for Ukraine, our refined products come from that part of the world, not only Western Europe.

“So, the price has gone up because our refined products come from that part of the world and disturbances such as the one happening there, will impact supply one way or the other.”

On concerns around DSDP and how it would further prolong petrol scarcity, another trader stated that the continued theft of crude oil had impeded NNPC’s ability to settle its crude oil supply obligations to traders on schedule.

“Now the NNPC brings in products through Direct Sale Direct Purchase of crude. Now I’m telling you that the NNPC owes traders crude oil under the DSDP scheme and you know why? It owes crude oil because people are stealing the crude and they don’t have enough crude to pay.

“So the NNPC owes the traders who bring them refined products. So when they (NNPC) say give me some more, the traders will reply by saying, but you are already owing, pay us. The NNPC cannot pay because people are stealing crude.

“This tells you that the petrol scarcity problems may continue if something drastic, particularly the deregulation of the downstream sector, is not done as soon as possible”, the source added.