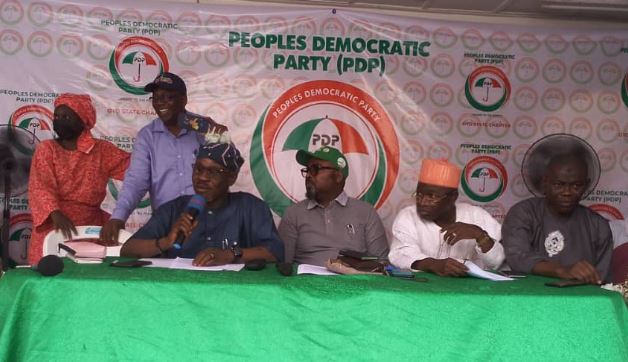 IBADAN – Barrister Hazeem Gbolarunmi has berated Oyo State Governor Seyi Makinde over what he described as excessive borrowing and lack of respect for the wise advice of party members and leaders on how to move the state forward.

Alhaji Gbolarunmi, a former Deputy Governor of Oyo State, in his Bodija residence on Tuesday during the Peoples Democratic Party (PDP) stakeholders’ meeting, condemned the action of the state governor, Governor Makinde over lack of respect for elders of the party as well as his refusal to listen to wise advise of the party leaders and members, stressing that this action has resulted in gross failure under his administration.

He further said, “Unfortunately, Governor Makinde has no iota of respect for wise counsels and suggestions from State Members and Leaders of the Party, meaning, the Governor has never been ready to promote and nurture democratic ideals and traditions of the Party on a sustainable basis. These can be corroborated by various Reconciliatory Teams that PDP National had set up at various times, solely to address all the internal problems of the Party, in Oyo State.”

“However, the Governor was mainly concerned with rewarding his former political party, SDP, and members of the party. This is not only anti-party action but a display of poor leadership actions. Appointments of anyone outside PDP would have been justified if there are no qualified and competent alternatives in PDP, and if those appointed by the governor had performed up to or beyond
expectations, in their various positions of responsibilities.”

“As it is now in Oyo State, the Governor has re-introduced the past mistakes, which are- politics of winners take all, and losers lose all, as well as, politics of exclusion, and cash and carry. Contrary to the PDP ideal that, the Party shall strive through dialogue to ensure the entrenchment of true justice for all in our body polity and for the emergence of a credible leadership that will give purpose and direction to Nigeria, unprecedented disturbances and decamping by many members, including those who have been PDP members since inception, because of unbearable autocracy and anti-party actions of the Governor, who joined the Party, barely three years ago, is another unfortunate occurrence in the Oyo State PDP.

“The same platform that gave all necessary, and in fact more than necessary and needed support, finances, and loss of lives of some members, while actively participating, to ensure the emergence of Engr. Seyi Makinde, as current Governor of the state.”

“Only one Block, which is that of Barrister Hazeem Gbolarumi, is left in the Party at Oyo State! That same Party was solidly united, such that it could pave way for the Governor, about three years ago.”

“The nomination and candidature of Engr. Oluseyi Makinde, as well as, his emergence as the current Governor of Oyo State was not a decision or action of an individual in Oyo State PDP but, deep, collective efforts and labour, which even, involved coalitions. The PDP, in pursuit of its goals, believe that a level playing ground is a sine qua non to a free and fair electoral process.”

“So, why is it in the interest of the Governor, not only to severely split the Party that presented him as a candidate in 2019, but to also constitute himself as the agent of nominating candidates, including people from other political parties, who ordinarily would not have been able to win any ticket in the parties they belong to?

“Loyalty and commitment to the Party So, why did thousands of members belong to PDP, if they have to come under the umbrella for several years, even, up to decades, only to watch as an individual who joined the Party barely three years ago distribute nominations to those he wants? What exactly then is the meaning of PDP Slogan, Power to the people? How will PDP be still committed to, the principle of Participatory?” Gbolarunmi stressed.

The former Deputy Governor, however, maintained that he has purchased a form of interest and intention to run for governor of the state under the PDP, noted that he has equally submitted the form and is ready to take the mantle of leadership from Governor Makinde come 2023 with the aim of moving the state forward through the provision of adequate security and expansion of the state economy among another meaningful and developmental programme.