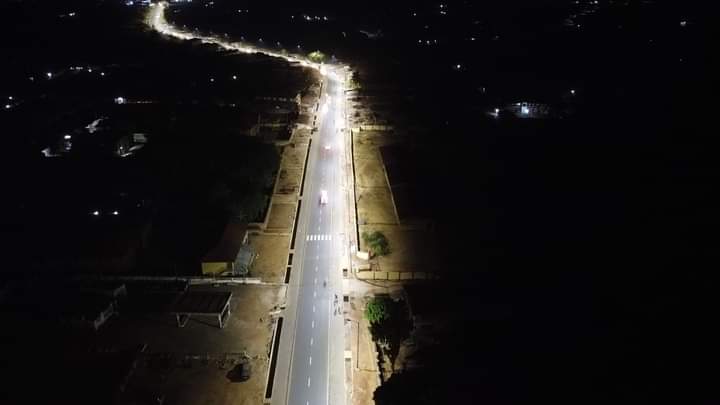 On Thursday, 17th March, 2022, the Governor of Oyo State, Engineer Seyi Makinde was joined by his Bauchi State counterpart, Alhaji Bala Mohammed to cut the tape of the 5.2 kilometre Gedu-Oroki-Asipa-Sabo Road.

In the records of the Oyo State government, that is another promise kept. In the reckoning of Governor Makinde, that road is another leap at reducing the infrastructure deficit of Oyo State and it is in keeping with his commitment to build infrastructure that targets the economy.

Certainly, the Makinde government has earned itself a well-deserved identity of engineering a modern Oyo State, which has become a huge construction site for infrastructure projects that not only connect the economic corridors of the state but also bring respite to residents, who have been troubled over the years by bad roads.

From the 65 kilometres Moniya-Ijaiye-Ojutaye Road started and delivered under 18 months, the LAUTECH-Under G-Stadium Road in Ogbomoso, the completion of several internal roads abandoned by the previous government including the Basorun-Idi Ape-Akobo Road; and the ongoing constructions of Ajia-Airport Road with spur to Amuloko; Oyo-Iseyin Road; Saki-Ogbooro-Igboho Road, as well as the Ibadan Circular Road and the Ogbomoso-Fapote-Iseyin Road, the vision of connecting all zones in Oyo State for the greater economic good of the state has remained strong.

But for those who may not know, the 5.2 kilometre stretch of the Gedu-Oroki-Asipa-Sabo Road is one of the arterial roads of Oyo Town, covering the area historically known as Isale Oyo. It is plied by farmers who transport farm produce, traders who move goods to the various landmark markets in Oyo including the Akesan Market rebuilt by the Makinde government into a world class ultramodern market.

For decades, that road was neglected and impassable and residents of the area had lost hope in government bringing succour to them, at least, that was what they said.
But at a time that Oyo residents had lost all inspiration about a good thing coming out of Nazareth over the Gedu-Oroki-Asipa-Sabo Road, the Makinde government came through for the people in mid-2020.

In its characteristic manner, the Makinde administration had set a target of quality and speedy completion for the contractor. It had equally ensured that a son of the soil was awarded the contract for N2.9 Billion, with Ahmak Engineering LTD handling the project.
In exactly less than two years, the Gedu-Oroki-Asipa-Sabo Road is being delivered for the use of Oyo residents and it was also picked as part of the 220-something kilometres roads to benefit from the Light-Up Oyo Project. Not only do residents of Oyo have a new Gedu-Oroki-Asipa-Sabo Road with a width increased from 8m to 12.3m, the road is well-lit and marked, making it a beauty to behold during the day and at night.

Today, the Gedu-Oroki-Asipa-Sabo Road has come on stream as a masterful infrastructure that would not only ease the burden of the people, mostly farmers and traders, but also improve the economy of Oyo Town.

Of course, it would not be the first time that residents of Oyo would witness a road project, but the manner of the delivery of this project, they say, is heart-warming and confidence-boosting.

Some of the residents who spoke on the state of the road had only words of praise for the governor, because, according to them, they were in the same Oyo when the previous government of the All Progressives Congress (APC) of Senatot Abiola Ajimobi awarded the 6.2 kilometres Aafin-Owode/Ojongbodu-Owode Road for over N6 Billion in 2013 and abandoned same for over two years before eventually doing shoddy job of completing the road in 2017, over four years since it was first awarded.

Indeed, Oyo residents, who now pray for Governor Makinde for making them believe in government again, said that they cannot forget what his government has done for them on the Gedu-Oroki-Asipa-Sabo Road.
They say that they cannot forget Makinde for bringing smiles to their faces by fixing the long-abandoned road, which at a point, became a burden to its users, with multiple accidents and other tales of woe.

Yes, residents of Oyo, who were alive to see the previous administration badly execute a 6.2 kilometres of road with over N6 Billion and watch it abandon the same until His Imperial Majesty, Oba Lamidi Olayiwola Adeyemi III, pulled his influence to make the government wake up to its responsibility.

Certainly, Oyo residents and indeed, residents of Oyo State cannot forget how the powerful monarch had to go through the rigours of publishing an advertorial in a major newspaper to plead with the late former Governor Ajimobi to complete the road it started in Oyo while celebrating six years in office.

Oyo residents say, and with boldness too, that they cannot forget the words of Baba Alaafin to Ajimobi in which he said the governor could not score a distinction because of the slow pace of works on Oyo roads.

The people of Oyo now say that they cannot forget how the Makinde has delivered a quality road project to time, despite the challenges of COVID-19, which ravaged the world at the point the road was awarded.
Who would have thought it? That in the same Oyo Town where it took special pleas and the goodwill of the Alaafin of Oyo to push the previous government to ensure the completion of the 2.5km Afin-Owode and 4km Ojongbodu-Owode Road after abandoning it for years, a governor would start and finish a project in record time?

Of a truth, Oyo cannot forget this governor, the governor who made a commitment to the people and has been steady and unrelenting in fulfilling it.

Like Oyo Town, the people of Oyo State cannot forget the sterling records of the Makinde administration in the area of road infrastructure. Not only is the government starting and completing quality road projects, it is doing so with timelines for delivery and hitting the marks at every point.

To put things in the words of the governor himself, his administration has rebuilt public confidence in government, as the people can now rest assured that once the Makinde government awards a project, it will not become an abandoned project. Now, how can people forget this kind of governor?