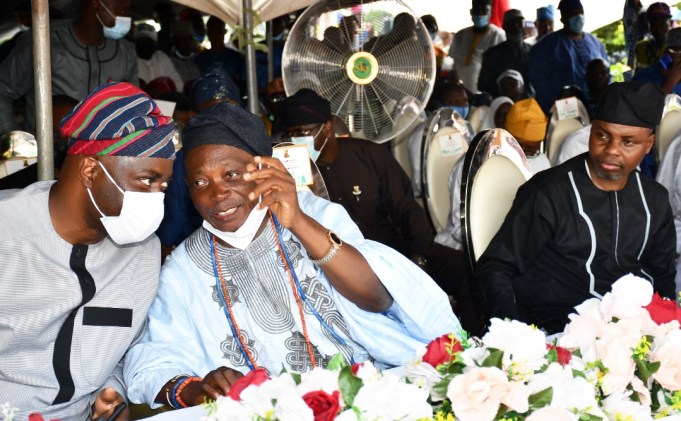 Many leaderships across the world are always weary of scholars because they feel they are too independent in exercising discretion.

The leaderships believe they needed scholars around them to give aura of erudition to even their meaningless decisions. They desire to have scholars around to curry intellectual endorsement to their most time not well thought out opinion.

The reason is not far from the natural and age long respect for scholarship and erudition of the scholars. People believe in scholars and they never doubted their position on issues . There is general humility before knowledge.

At the point the scholars got wooed by wealth and or position, he subscribed to slavery, lost his independent discretion and tongue for speaking the truth. In this unfortunate interaction between leadership and scholars, the scholars will lose respect, honour and nobility.

Oyo state made a pacesetting history on the 21st April,2021 at 7th Omituntun Mosque Annual Ramadan lecture entitled Unity in Diversity;Islamic perspective, when Professor Oladosu Afees proved the scholars are not always for sale. He demonstrated unusual courage and ordacity to speak the truth before the leadership, unlike trader- scholars whose stock in trade are praise singing .

Prof Oladosu Afees courageously triumphed over clientele relationship between scholars and leadership over what they intend to get of crumbs facing the truth with eloquence, politeness and rhythmic gesticulation.

Prof Oladosu called the attention of the Governor while sitted to unhealthy relationship between him and his deputy Governor calling for amendment. This is a development and an unfortunate gulf some scholars are feasting over and cashing out happily.

Many scholars, spiritualist and politicians have built consultancy around non-rosy relationship of the Governor and his Deputy and this is Oladosu who will not profit from unfortunate situation

Prof Oladosu told the Governor with all sense of eloquence and politeness how some misguided enthusiasts working under him are frustrating Muslim girls and ladies wearing modesty and exercising fundamental human rights in the name of Hijab.

Prof Oladosu took the audience spell bound when he copiously called the Governor to justice, equity and fair dealing especially as it affects the Muslim community and as important recipe for unity as against the praise singing and ego- massaging of brown envelope and jeep-targeting scholars.

To the chagrin of the stupified audience, Prof Oladosu pointed to the Governor and the audience sitted a manifest Injustice done to two MUSLIM judges (now late) by denying them elevation due to them simply because they professed Islam .

Prof Oladosu, again, has brought back scholars, the deserving honor, respect and nobility.

We earnestly hope the Governor will not wish away the content of this well delivered and timely lecture listening to crumbs-picking and jeep targeting scholars and ill advisers among the followers.