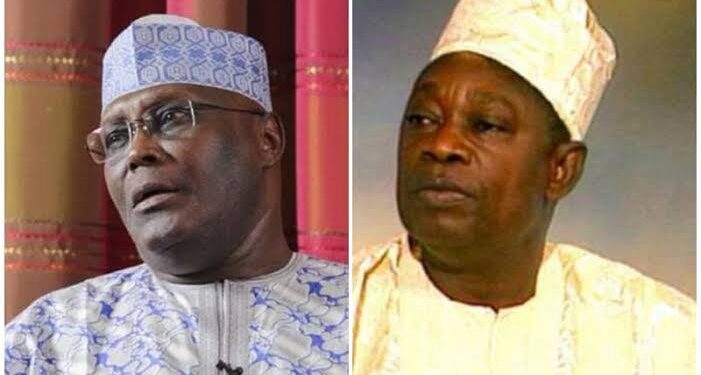 History: How MKO’s Denial Of Atiku As Deputy Linked To His June 12 Annulment

At the Jos Township Stadium, during the SDP primaries in 1993, Babagana Kingibe, who came very tightly close to Abiola, had the support of most SDP Governors like Oyegun of Edo, Bamidele Olumilua, Felix Ibru etc and also others like Emeka Ojukwu, Arthur Nzeribe, Olusola Saraki, Ben Obi, Ebenezer Babatope were all bitter haters of MKO and great supporters of Kingibe and as delegates, they cast their votes for him in the first ballot and were ready to do same in the second ballot.

Those three were the leading aspirants and a run off must be conducted among the trio to select the flagbearer.
Yoruba Leaders in Jos thought it may be over for MKO since Kingibe and Atiku polled 5,321 to MKO’s 3,617…..if Atiku merged with Kingibe, one of them will get the ticket!!!!

To break any possible alliance between Atiku and Kingibe, these three people headed straight to Ambassador Kwande’s house where General Yar’adua was to have a chat him, they were Dosu Ladipo, Adedibu, SM Afolabi.

General Yar’adua was Atiku’s godfather.
On getting to Kwande house, they approached Yar’adua personal assistant Inua Baba who told them that General was sleeping and shouldn’t be disturbed. The trio ignored him and went straight to General’s bedroom and banged his door!
“Mi ni ni?” Yar’adua shouted..
“Open the door General” the trio screamed back.
He opened the door.
The trio begged Yar’adua to stop Atiku. “Remember how we became Yoruba people enemies when we supported you and jettisoned Falae, help us too to regain our love back from our people. Tell Atiku to step down.”
Yar’adua agreed…..”For you good people, I agree to support MKO. Go and bring him. I can do anything for my friends” Yar’adua replied.

Immediately, Abiola joined the trio and Atiku also came in to join Yar’adua.
Yar’adua and Atiku spoke in Hausa at length and in the end, Atiku broke down in tears, wept when his boss asked him to step down. Yar’adua gave him handkerchief.
While he was weeping, Abiola went close to him, hugged him and told him “you will be my deputy..”

Atiku then spoke, facing Yar’adua “Since you’re the one who brought me into politics sir, I cannot disobey you…”
That was the statement that sealed Kingibe’s fate in Jos and by the time Atiku announced his withdrawal for MKO, the SDP ticket went to Bashorun Abiola.

After MKO hugged Atiku and told him “you will be my deputy”, here is the politics that follows..

Atiku and co left Ambassador Kwande’s house and headed to the Jos Township Stadium where he mounted the podium and announced his withdrawal from the race leaving only Abiola and Kingibe.
Atiku’s withdrawal gave victory to MKO.

The normal thing for MKO was to immediately announce his deputy during his acceptance speech, that was the plan. But immediately Abiola was declared winner, before anyone could say Jack Robinson, Kingibe stood up and walked towards MKO “My President, I’m loyal”, he said, before Abiola could recover from the shock of Kingibe unexpected greeting “I’m the best VP that can give you victory” Kingibe continued right inside the stadium while his “corpse” is not yet cold. “Please, Please, Ambassador, this is not the right time for this, please”…..Abiola replied Kingibe.

But 12 out of 14 SDP Governors also asked Abiola to pick Kingibe or they sabotage his campaign!!! Only Kolapo Ishola and Osoba supported Mko to wholeheartedly.
This was why Abiola completely omitted VP issue in his acceptance speech to avoid the wrath of the governors and not to break Atiku’s heart!!!!

Shortly after his victory, IBB called MKO and told him to pick Pascal Bafyau if “you want me to handover to you”…..IBB also warned MKO not to pick Atiku at all as he won’t be able to survive the Fulani collaboration being sponsored by Yar’adua and symbolised by Atiku.
Abiola was in dilemma.
Again, Abiola was to address SDP supporters in Kaduna, expectedly, to announce his deputy. Atiku had arranged two horses, one for Abiola, one for him. That was SDP style of celebration. Again, for the fear of the governors and IBB, Abiola didn’t announce his deputy again, for the second time.

One day, in his house in Ikeja, Abiola, via a press conference, announced Kingibe as his deputy, There by bowing to the deadly wishes of Governors and ready to go into war with IBB and pacify Atiku.
The excuse given to justify this was that “Atiku stepped down but he didn’t say he stepped down for Abiola”…..Abiola supporters knew that Abiola won’t win if Atiku didn’t step down but politics is a crafty game.

It pained Atiku to his bones.
Indeed, IBB kept his threat. He sabotaged June 12 and Yar’adua took his pound of flesh when he threw his weight behind the annulment and opted for Interim Government!!

May God bless the reading of History for enlightenment of our souls.

Traditional Rulers: Our Vote Is For Any Party That Gives Oke-Ogun Indigene Oyo North Senatorial Ticket

2023: Two APC Lawmakers That Will Not Return To Oyo Assembly Next Year