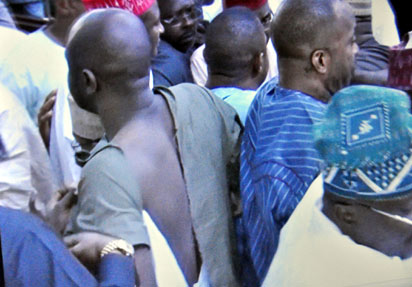 Group under the umbrella of Positive Minds(PM) in Ibadan Northwest/Southwest Federal Constituency, Ibadan, Oyo State has described ex member of the House of Representatives, Hon. Saheed Fijabi as a hooligan whose Mike Tyson’s approach to sensitive issues while he was at the hallow chamber can’t be needed any more.

Ganiyu Musbau and Samuel Sunday, Chairman and secretary to the group in a release they jointly signed and made available to news men, said the green chamber of National Assembly would no longer need the legislative inputs of Hon. Saheed Fijabi who turned himself to Mike Tyson on any issue that required round table discussion and gentlemen’s resolution.

The response of the duo was in connection with the statement credited to ex member of the House of Representatives who asked the current member representing the Federal Constituency, Hon. Adedeji Stanley Olajide to check himself and People’s Democratic Party(PDP) over the purported attacks that were launched on his constituency projects.

Musbau and Sunday asked Saheed not to cry more than the bereaved, and stop being felt guilty of the dastardly acts that he was not alleged of, adding that he is allowed to tender an unreserved apology, provided he had hands over the complete destruction of the projects.

On issue of the constituency projects, the group’s chairman and scribe asked Saheed to show records of all achievements attained in his two terms of eight years at the House of Representatives, adding that if he could not substantiate what he did, he has no right whatsoever to tarnish nor rubbish what Odidi Omo had done in the last two years.

They said they were bold to say that Odidi Omo remains a true ambassador and dynamic parliamentarian that Ibadan Northwest/Southwest had produced ever.

They stressed that he is a lawmaker who had organized empowerment programmes for his constituents, without minding huge amounts of money that were committed to those engagements.

They tongue lashed Saheed for condemning Odidi Omo, in respect of goats’ empowerment that he organized recently, stressing that the applauded empowerment came into place as a result of the needs for such at that point in time.

The duo asked Saheed to think of other method to sell himself to the constituents and general electorate who had outrightly rejected him as a result of his hooliganism and Mike Tyson’s approach to issues.

They challenged him to publish what he was able to do within his eight years as a member of the House of Representatives,who represented Ibadan Northwest/Southwest Federal Constituency and they would simultaneously unveil what Odidi Omo had attained within two and half years.