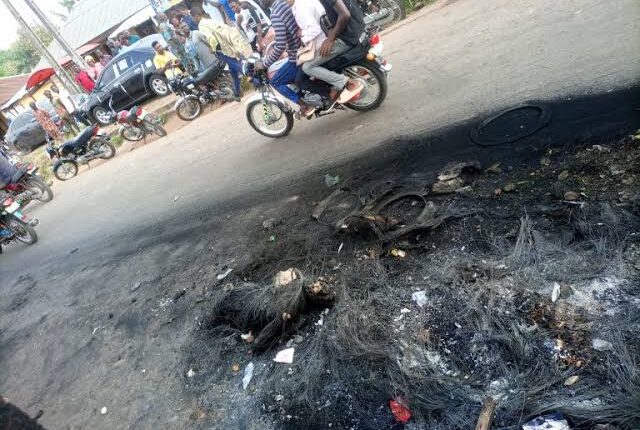 How Angry Mob Burnt Suspected Thieves To Death In Ibadan

Some witnesses who preferred not to be mentioned have narrated how two suspected thieves were burnt to death by angry mob at under-brigde, Akobo, Ibadan.

Witness account revealed that the two unlucky thieves on Wednesday, 20th July, 2022 robbed a commercial motorcyclist of his bike within the area and tried to escape with the motorcycle.

The witness also explained that suspects were later caught after they made attempts to run and shot at their chasers.

“The two guys, before their death, had charms and guns on them. They even shot at those chasing them”, a witness explained.

“They were mobbed following accumulated anger of frequent thefts in the State in the last few weeks,” another source told Oyo News.

However, Men of the Nigeria Police Force, Oyo State command who were at the scene were unable to rescue the suspects as the suspected thieves were already smouldering in the fire.

As at the time of filing this report, Police operatives were already making efforts to bring normalcy to the area.