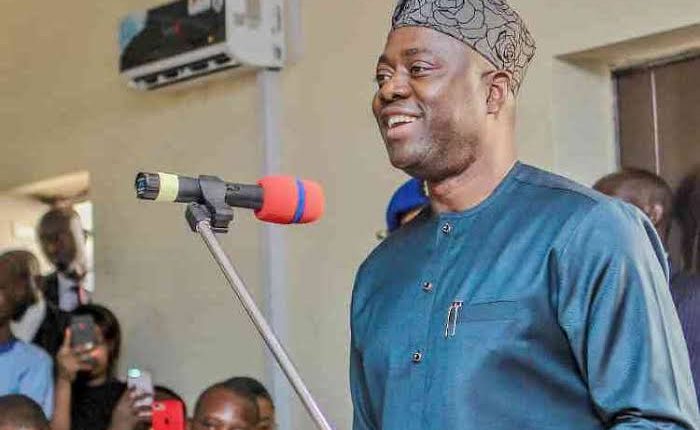 Oyo State Governor, ‘Seyi Makinde, said on Saturday that traditional rulers, as custodians of culture and tradition, should only honour credible individuals who have displayed high moral values and integrity in the society with chieftaincy titles.

This was just as the governor expressed confidence on the chances of Ambassador Taofeek Arapaja in the PDP Southwest Zonal Congress slated for Osogbo, saying the former deputy governor and former member of the House of Representatives possesses the experience needed to move the party forward.

The governor stated these in Ogbomoso, while speaking at the installation of the Director-General, Oyo State Investment and Public and Private Partnership Agency (OYSIPA), Hon. Segun Ogunwuyi, as Otunba Mayeloye of Ijeru Kingdom.

According to the governor, by honouring only credible individuals with titles, traditional rulers would be able to attract a number of good-spirited Nigerians to render good service to the people.

A statement by the Chief Press Secretary to the governor, Mr. Taiwo Adisa, indicated that he extolled the virtues of the OYSIPA DG, describing his installation as Otunba Mayeloye and his wife as Yeye Mayeloye of Ijeru Kingdom as a well-deserved honour.

While speaking at the event held at the Lagbami Oseku Hall, Ogbomoso South Local Government, Arowomole, Ogbomoso, Governor Makinde described Ogunwuyi as one of the future leaders of Oyo State and Nigeria.
He stated that the former member of the Oyo State House of Assembly and House of Representatives has good records in all the places he had served in the country, adding that his footprints are still noticeable in the House of Assembly many years after he left.

The governor said: “First, I want to say that this honour is well- deserved and I want to thank God that one of us is being honoured in his homestead. They do say that prophets are usually not honoured in their homes but this one is being honoured at the grassroots.”
Speaking on the zonal congress of the Peoples Democratic Party holding in Osogbo, Osun State, the governor said that Ambassador Taofeek Arapaja will equally emerge victorious in continuation of the honour done to Ogunwuyi.

He said: “You would have been having a premonition about what will happen on Monday (in Osogbo); the Mayeloye title will really be made manifest in Arapaja as he will emerge the chairman.

“I am glad that one of our own, who is also one of the future leaders of this state and country, is being honoured in his home base.
“We have seen people who stole money and were also honoured with titles. But the personality whom Kabiyesi is giving this title today is one who is having impact in the lives of our people in the state.

“He has served at the House of Assembly with a good track record. He has also served as a member at the House of Representatives. I searched for his records and observed that he served meritoriously. Since we got into government, I can confirm that he has been doing his best for the government of Oyo State as DG of OYSIPA.

“So, I want to beg our Kabiyesi to always honour people like Honourable Ogunwuyi so that they can encourage others to serve our state.”

While speaking at the brief event, the Onpetu, Oba Sunday Oladapo Oyediran, Lagbami Osekun III, said that the governor has started well by delivering dividends of democracy.
He prayed that the Almighty will continue to guide the governor to deliver more developmental strides to the people of the state.