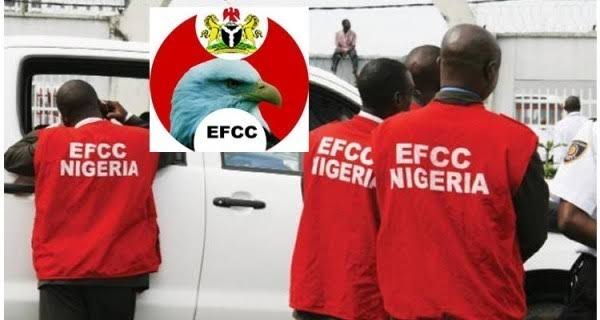 How EFCC Officials Broke into Our Hotel Rooms, Seized Phones, Drove Away Cars in an Ibadan Hotel — Lady Reveals

A Twitter user who simply identified herself as @Ambrosia has taken to the social media platform to lament how some officials of the Economic and Financial Crimes Commission, EFCC, in Ibadan, barged into her hotel room where she lodged, breaking doors in the middle of the night.

The lady said she and her boyfriend had always lodged in the hotel whenever he was around without any challenge since 2020 until around 3am on Wednesday when two men suddenly forced open their door without knocking screaming “This is EFCC, this EFCC, bring your phones, bring your phones”.

“My bf came down to Ibadan to see me and we lodged in the hotel we’ve always stayed in since 2020. Fast forward to around 3 am, we heard a loud bang from our sleep and gbam, the door was wide open already. Two men came in and dragged one young guy in as well and kept screaming in our faces.
I was so confused because from where to where??? I was really scared for my boyfriend because he has a nerve condition and I didn’t know what all that fear and anxiety could do to him”.

@Ambroisa who identified the place of the incident as AThree hotels in Samonda Ibadan said she tactfully bought time for her boyfriend who was already fidgeting because he is into cryptocurrency, by passing her phone first for searching.

“They asked for his ID and asked him to open his phone, he kept fidgeting because of the phone part and I knew why. I gave them my phone first to pass time and hopefully, he could hide the apps or something. They asked if I was a student and I said no, that I’m a baker. They went through my gallery and asked if those were pictures of my works, I said yeah. Then they passed it back to me. They started searching my bf’s phone and one asked if I was his gf or wife and I decided to seize the opportunity to make small talk and jokes. Told him I’m his gf but I’m on the way to becoming his wife. He laughed and asked why he hasn’t married me yet, I said no money. He said but we have money for hotel, I said hotel money is shikini nau Officer, we want a big wedding. He laughed and said we must marry o, I said definitely and I’d even send an invite to them. He laughed and asked his colleague to give my man his phone back because of me. That they should move on to other rooms”.

The EFCC officials allegedly caused a lot of damage in the hotel as the lady recounted that every door to each room in the three buildings of the hotel was broken.

“They raided all rooms and packed a lot of guys and girls. Drove their cars away too. Beat some, punished some, etc. It was horrible”, she added.

INTERVIEW: We Formed Parallel Excos, Can’t Continue To Look When They Use “Jagba” For Us — Abu Gbadamosi