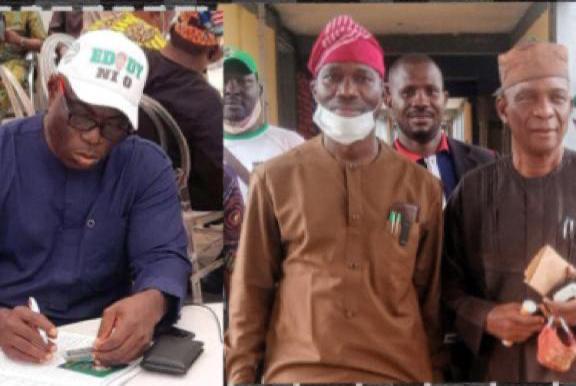 Fresh facts on the crisis rocking the Oyo state chapter of the Peoples Democratic party (PDP) emerged on Tuesday as a Commisioner loyal to the state governor, Engr Seyi Makinde removed names of loyalists of one of the aggrieved leaders of the party, Alhaji Bisi Olopoeniyan as the beneficiaries of employment programmes organised by a member of house of Representatives, Hon. Abass Agboworin.

Westerndaynes recalled that Olopoeniyan and gov Makinde are in loggerhead over some disagreement in party affairs.

With the recent visit of the Southwest zonal chairman, Amb. Taofeek Arapaja to Alh. Bisi Olopoeyan last Saturday, many had thought, the crisis in the party was over.
It was gathered that, party leaders from Ibadan Northeast Local Government where Olopoeyan and governor Makinde came from had vowed to scheme out all political traces to Olopoeyan in the council.

It was gathered that, after Southwest zonal chairman, Arapaja visited Olopoeyan with a promise to settle all the rift between the governor and other aggrieved members of the party, the acting local government chairman of Ibadan Northeast, Alhaji Isiaka Fatokun Abuye, commissioner for local government and chieftaincy matters insisted that the names of Olopoeyan loyalists’s must not be included.

Agboworin, lawmaker representing Ibadan Northeast/Southeast Federal Constituency wassaid to have scheduled a mega empowerment programme for Thursday 20th, May, 2021 for residents of his constituency.

The duo, Abuye and Bayo Lawal, were said to have used issues between governor Makinde and Olopoeyan as excused to removed the names of Olopoeyan loyalists, and replaced with their families and cronies.

Effort to get reaction from Hon. Abass Agboworin was unsuccessful but his media aide, Mr. Ibrahim Aremu told our correspondent that his boss, Agboworin was not aware of the development.

“Hon. Agboworin is for all, he can’t remove Olopoeyan’s loyalist names, he can’t give such directives. But however, if truly those names were removed, that means it was the handiwork of those leaders from the local government,” he said.

An source close to the commissioner who crave for anomity confirmed that, the removal of Olopoeyan’s loyalists from the list was deliberate and intentional.

The source said; “the beneficiaries were screened and when noticed some people on the list were from Olopoeyan house, the leaders agreed to remove them all from the list because their leader, Olopoeyan is not in accord with governor Seyi Makinde.

“The leaders said they can be feeding Olopoeyan people because he (Olopoeyan ) is fighting with governor Makinde. Thou, this is only happening in Ibadan Northeast, can’t really say if Southwest’s leaders also did the same.”

One of the beneficiaries with missing name, Alhaji Mojeed Badmus PDP Ibadan Northeast Ex-officio while speaking with westerndailynews, he said he called hon. Abass Agboworin to confirm why some names was removed from his empowerment list after shortlisted because they are loyal to a certain leader from the local government. “ I called honorable to confirm why he decided to sideline some people, Agboworin told me on phone that, he never removed any name or sees any leader as his enemy, said all he did was that, he approved all names sent to him and give it out for documentation for empowerment, so don’t known when some people started to remove names”. Badmus confirmed.

In his reaction when contacted, Alhaji Bisi Olopoeyan said, he heard that some names was removed from Hon. Abass Agboworin empowerment beneficiary’s list because they are his loyalists but he is not moved, added that, he has been taking care of his loyalists even before Hon. Agboworin emerged as federal lawmaker.

It is true my loyalist’s names was removed by Bayo Lawal and co, but am not bothered, have been caring for my loyalists even since Agboworin became elected and am not tired, with God grace, am always there for my people and I will always be Insha Allah.