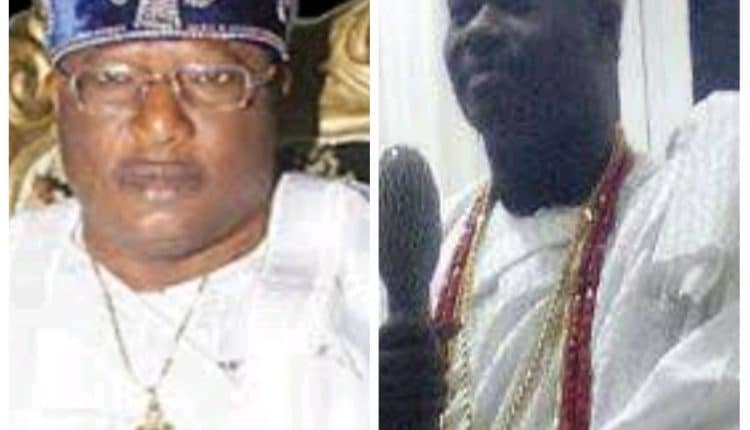 How Oduduwa Varsity Boss, Ramon Adedoyin’s Inordinate Ambition To Occupy Ooni’s Stool Pitted Him Against Ooni Of Ife• How He Sponsored Campaign Of Calumny Against The Monarch

For many who do not know, there has been a war brewing between the Ooni of Ife, His Imperial Majesty, Oba Enitan Adeyeye Ogunwusi and embattled founder and president of Oduduwa University, Ile Ife, Dr. Ramon Adegoke Adedoyin.

However unlike most wars, this is one sided as Adedoyin’s disdain for the Ooni has led him to engage in a campaign of calumny against the Ooni who is yet to pay him any attention.

This vile attitude from Adedoyin towards the Ooni dates back to the demise of the immediate past Ooni Of Ife, Oba Okunade Sijuade, in July, 2015 when there began an intense jostle for his successor.

Adedoyin a businessman, was among the over 60 candidates from the different ruling houses, angling to step into the shoes of Okunade as the next paramount ruler of Ile Ife, the cradle of Yorubaland.

In the course of the succession tussle, most of the candidates resorted to unprintable things just to be named the chosen one. The most ambitious of the lot was and is still, Adedoyin. This is despite the fact that by virtue of his maternal genealogy, he did not really qualify to contest the revered title.

However, Adedoyin resorted to a get-it-all-cost approach to the succession race.

But stark reality dawned on him when the 16 official kingmakers pruned down the ruling houses to present the next Ooni-elect to Giesi Family, which Adedoyin did not belong to.

It was indeed a big blow to the businessman who had hitherto been bragging with the false claim and belief that, come what may, and either by fair or foul means, he would get the slot, coupled with his stupendous riches and wide connections among the High Chiefs, especially late High Chief Omisakin, the Obalufe, who was then the de facto head of the kingmakers, Urban Life is reporting.

Adedoyin knew well enough the role Omisakin would play in the final selection of who becomes the next of Ooni and began to secretly warm himself into the heart of Omisakin, by splashing gifts items including money on the High Chief, hoping Omisakin would influence other High Chiefs to favour him by selecting him as the next Ooni.

It is important to note that, even with the Giesi family, that the king makers eventually picked to present the next Ooni-elect, Adedoyin was still not moved. He was too confident of the outcome, believing that his plans would come to fruition.

But to his dismay, Prince Enitan Adeyeye Ogunwusi was eventually selected as the next possible successor to the late Oba Sijuade.

Adedoyin’s adrenalin was alleged to have risen abnormally due to the new development.

He began an intense campaign of calumny to discredit and disparage the youthful Adeyeye, who the Ifa Oracle had traditionally picked, courtesy of the kingmakers, who had all jointly sworn to an oath, to not alter the choice of the Ifa Oracle.

Adedoyin has stopped at nothing to launch vile attacks and making derogatory remarks on the person of Oba Ogunwusi and his impropriety to occupy the plum throne.

Adedoyin is alleged to have spent, and is still spending tons of naira, to make real his campaign of calumny against the unusually calm Ooni.

To make matters worse, Omisakin, who was a recipient of Adedoyin’s largese to help sway things in his favor, died even before the new Ooni was officially installed. It was mythically believed that the Ifa Oracle vented its spleen on Omisakin over a possible betrayal, after joining other kingmakers in the oath-taking exercise that was carried out before the selection.

There has been many instances proving Adedoyin’s resentment to the choice of Enitan Ogunwusi as the Ooni of Ife, Ojaja 11.

Adedoyin was alleged to have sponsored a popular Ewi exponent in the South West, otherwise known as Ologundudu, to go on air to castigate and disparage the person of the Ooni, using many vile and unprintable adjectives to describe the Ojaja 11. Ologundudu said the Ooni, a land grabber, visa racketeer, fraudster and a man of questionable character,was not fit to wear the coveted crown.

Many wondered whether Ologundudu was in his right senses to have accepted such a dangerous hatchet man’s job from an obviously sinking man, at the expense of his flourishing career. They wondered how much Adedoyin paid him to embark on such a satanic journey.

One poignant instance in Adedoyin’s alleged campaign of calumny against the Ooni, was when at an occasion, the Ooni had a warm and friendly handshake with billionaire oil magnate, Femi Otedola. Adedoyin allegedly kicked against the gesture from the Ooni to have stooped so low as to have a handshake with someone without royal blood in his veins, claiming that by that singular gesture, the Ooni had desecrated and decimated the revered stool, adding that the Ooni had belittled the position of Ooni of Ife.

What is more, the embittered Adedoyin, is also alleged to be the sponsor of most of the campaigns of calumny and chastisements of the Ooni of Ife on the social media.

In response to these campaigns of calumny, the House of Ododuwa. In very strong and unambiguous terms, debunked in totality all that Adedoyin and his co-travelers have been saying about the Ooni in a bid to tarnish his image. They described Adedoyin as a man with inordinate ambition, without any sense of decency to accept gallantry in losing.

According to High Chief Adekola Adeyeye, the Lowa Adimula of Ile-Ife, who was the traditional aide-de camp to the last Ooni of Ife, Oba Sijuade for 14 years, and the present second-in-command to Oba Ogunwusi, “Adedoyin is just like a helpless lone ranger shouting in the wilderness; and despite all his ranting, pull-him-down antics, baseless and unfounded assertions in the social media and other organs of communication, to discredit the Alaiyeluwa, HIM Enitan Ogunwusi, the Ooni’s credibility and eligibility to the throne have continued to wax stronger, and attract worldwide acceptance, and not about to wane, for any reason without any iota of doubt, not even Adedoyin’s tantrums and annihilations.

“The genesis of Ramon Adedoyin’s deep-seated animosity for the status quo stemmed from the very first day Oba Sijuade went to join his ancestors. First and foremost, he has never hidden his insatiable thirst for the Ooni’s throne, even before Oba Sijuade passed on in 2015, shortly after which he falsely claimed that Oba Sijuade had proclaimed him his successor while still alive.

“Shamelessly enough for him, barely a day after the demise of Oba Sijuade, the non-remorseful Adedoyin called me and said he was to be the next Ooni, and that the kingmakers should not change the wish of Sijuade; and I specifically told him that it was impossible; and that in Yorubaland, and in Ile-Ife in particular, a king does not appoint or impose his successor.

“After this, he went on with his plan B, saying that he was ready to give all the kingmakers five million naira each if they could assent to his wish to become the next Ooni. Again, I told him that the Ooni stool was not for sale, that he would be wasting his money if he went about giving any body money to any body for whatever selfish reason.

“He still went ahead to increase the amount to N50 million each, with an addition of a car each to all the 16 kingmakers. Still, I told him to go to blazes with his money. I told him point blank that, apart from the fact that he naturally did not hail from the Giesi family, he was not the one the Ifa oracle picked, and more so, he is not a son in kinship in his ruling house, as he stemmed from his grandmother to mother; in other words, he has no legitimate right to the kingship.

“But still, Adedoyin will not stop in his blind aspiration to the Ooni stool; he still went about employing many un-procedural and crooked means to achieve his ulterior aim, most of which we in the council were privy to, and were ready to circumvent him at all costs through our transparency and fairness of purpose.

“At this juncture, when we saw the tacit desperation, we the 16 kingmakers, determined to do a clean job, resolved to swear to an oath, that anyone who went against the wish of the oracle will have himself to blame, and will not live to see the next Ooni crowned on the throne.

“Perhaps, this was what happened to High Chief Omisakin, who had a very chummy relationship with the desperado Adedoyin. Again, in the course of the heated succession tussle, the Governor, Rauf Aregbesola, summoned all of us the 16 kingmakers to his office for a meeting in the presence of a handful of top government functionaries like the Attorney General, the Commissioner for Local Government and Chieftaincy affairs and so on, where we were told against our pre-conception that the governor had a candidate; but we were amazed to hear from His Excellency, that he didn’t want to hear of any problem arising from the succession to the throne, that everything should go smoothly as the tradition prescribes, without any of the candidates cutting corners.

“This averment by the governor actually emboldened most of us kingmakers and we were determined to do a thorough job, no matter whose ox was gored. According to the Lowa Adimula Ife, Ramon Adedoyin is only crying wolf where there is none; and besides, traditionally in Yorubaland, anyone who contested for a vacant throne and lost, should leave the town as soon as a substantial king is installed, but Adedoyin still remained in town, fomenting trouble and using his stupendous wealth to disrupt the peace of the town, and he is yet to abate, causing ripples everywhere and throwing tantrums at every perceived person who obstructed his crooked way to the throne.

“Never in the history of the town has anyone so brazenly and vehemently attacked the choice of the gods and the people.

“There was even a time he was attacking me on the social media using very vindictive language on me because I rejected his overtures. Anyway, I have already told my family that if anything should happen to me, Adedoyin should be held responsible, because one cannot know really the next thing on the game plan of somebody with the kind of Adedoyin’s ultra-high desperation that knows no bounds.

“One wonders why Dr. Ramon Adedoyin has been so vexatious about the whole thing; he is simply so inordinately ambitious, and the high time he realized this, the better. Ascension to any kingship throne is not by proxy, force or demand; it is by divine authority, and Adedoyin had better retrace his steps and stop all his vindictive, calumnious and uncivilized ways of trying to get what may never reach his hand, except if providence and God decree it.

“If he doesn’t know how to spend the stupendous money at his disposal, he should look in the direction of the less privileged in the society, especially in his native town Ile Ife, or by sponsoring indigent students via scholarship in his privately-owned Oduduwa University in his same town,” High Chief Adekola Adeyeye concluded.

Abdication of Duty: Adeolu Akande Under Fire By PDP Group Over Makinde’s Absence From Office