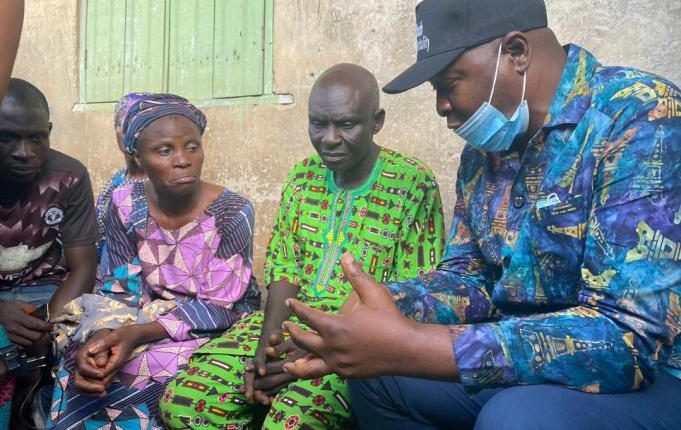 How Ogbomosho’s Monarch, Myself and Council of Chiefs Escaped Hoodlums Attack in Soun’s Palace—Sunday Dare

The Minister of Youth and Sports, Hon. Sunday Dare, narrated his ordeals at the council meeting in Ogbomosho when the hoodlums attack the palace of the first class monarch in the afternoon.

The Minister who came to the town on condolences visit to the family of one protester who fell by the bullet of the Police about 48hours ago, said he, the monarch and the council of Cheif were scurried for safety by the Police when he visited the Palace for a meeting.

“This afternoon, I arrived ogbomoso to pay my condolences to the parents of Isaq Jimoh who was felled by a police bullet. I also visited the 12 & 15 year olds at the Bowen Hospital both victims of Police stray bullets. Awaiting surgery. I appealed for calm & asked for justice,” the Minister tweeted upon arriving the town.

“Ogbomoso-Hoodlums, thugs & miscreants distrupt stakeholders meeting in Soun’s palace now-invading, stoning and breaking doors, glasses. Soun, myself and council chiefs were scurried into safety by the police and DSS. Ogbomoso youth are law abiding. But hoodlums have taken over.

“The hoodlums broke into the palace and destroyed chairs, overturned tables, broke windows. These were not Youth or Students. These were miscreants and thugs who saw a window of opportunity in the protest which since abated. Thankfully.Soun, the chiefs, leaders of Parapo are safe .

“A combined team of operation Burst from Ibadan and a unit from Iliorin are now on ground in Ogbomoso to help keep the peace, protect the peaceful and innocent and also stop criminal elements.Soun of Ogbomosho yesterday and today personally appealed to this group to stop violence,” the tweet read.

Over 700 Workers In Oyo, Ogun And Lagos Trained To Mitigate Childhood Cancer Early