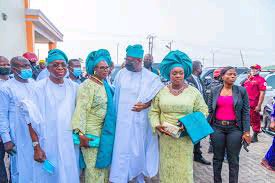 How Oyo Deputy Governor Daughters Wedding May Have Worsened PDP Crisis, If Makinde Had Chosen To Be Absent

The political crisis that has been befalling the Oyo State chapter of the Peoples Democratic Party (PDP) may have, probably, been worsened if Oyo State Governor, Seyi Makinde, had chosen to distance himself from the wedding ceremony of the daughter of the deputy governor of the state, Raufu Olaniyan.

It is important to note that daughter of the Deputy Governor of Oyo State, Raufu Olaniyan, began her wedding ceremony on Friday, December 3rd, 2021 and the marriage processes continued on Saturday, December 4th, 2021.

How Government Programmes Clashed With The Deputy Governor’s Wedding Ceremony?
According to a report by the OyoInsight, while the engagement aspect of the wedding ceremony of Oyo State Deputy Governor, Raufu Olaniyan, was ongoing on Friday, December 3rd, 2021 the Oyo State Government, under the administration of Governor Seyi Makinde, had decided to hold the State’s weekly executive meeting that ought to have been held on Tuesday, November 30, 2021.

Besides, the Exco meeting started on Friday at 3pm, the exact time when the Wedding Nikkah of the deputy governor’s daughter was scheduled to commence.

Also, the wedding fatiha of the deputy governor’s daughter which was held on Saturday December 4th, 2021 also was early thought not to, probably, earn the grace of Governor Seyi Makinde. This is because of another official assignment that seemed to have clashed with the wedding fatiha.

Considerably, as the wedding fatiha of the daughter of Oyo State Deputy Governor, Raufu Olaniyan, is scheduled to commence at 12pm in Ibadan, Oyo State Governor Seyi Makinde and his loyalists in the state government have also planned to be off to the far Oke Ogun axis of the state, where the Governor would be laying the foundation of the Administrative Building of the College of Agriculture and Natural Renewable Recourses, Ladoke Akintola University of Technology (LAUTECH) Iseyin campus.

Oyo PDP Crises and The Issues Around The Wedding

How The Attendance of Gov Makinde Might Have Eased The Tension?

Amidst uncertainty of his proximity to attend the wedding fatiha, considering what played out on Friday during the wedding Nikkah, Governor Seyi Makinde made the list of those dignitaries who graced the occasion of the wedding fatiha of the daughter of his deputy, Raufu Olaniyan.

If not for the attendance of Governor Seyi Makinde, the political camp of Olaniyan may have felt badly isolated, dumped and this may have, further, dashed the hope of restoring peace to the Oyo State chapter of the Peoples Democratic Party (PDP).

Makinde’s Ally Akika Bags Award, For His Contributions And Support For Islam