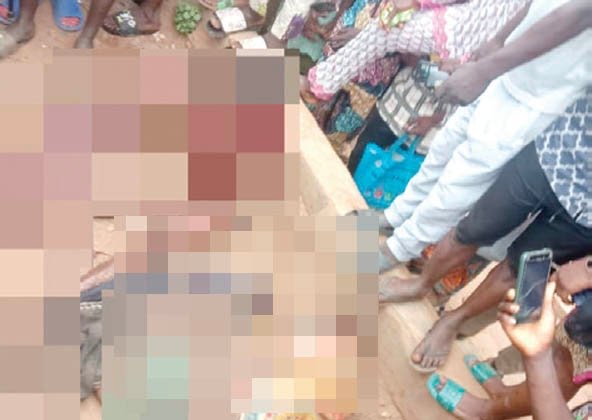 How Oyo Youths Torture Two For Stealing Bike In Osun

An angry mob tortured two boys along the New Ife Expressway, Ibadan, Oyo State, after they allegedly stole a motorcycle with an Osun number plate, FNN285QE.

PUNCH Metro gathered that the yet-to-be-identified boys snatched the motorcycle after they injured the owner with an axe and fled to Ibadan, unknown to them that the bike had a tracker.

A source said the owner, who collected the bike on hire purchase, called the company, Max Okada, and a four-man team on power bikes was dispatched.

The team reportedly caught up with the suspects in the Alakia area of Ibadan.

One of our correspondents learnt that some youths at the scene beat up the suspects and inflicted severe injuries on them before the arrival of the police.

An eyewitness, who spoke on condition of anonymity, said, “We were just sitting here when I suddenly saw three power bikes rode in roughly. Initially, I thought they were okada riders. They came down and pursued some guys who also parked a Bajaj Boxer Max Bike at the other side.

“Then, we heard that the boys stole the bike from Osun State; that was when some guys got angry and started beating them. This is not the first time these idiots will be stealing okada. Most times, they also kill the owner of the okada. We even saw the axe they used to attack the bike owner.”

One of the chairmen of Okada riders at Alakia Junction told PUNCH Metro that he stopped the mob from burning the suspects.

The state Police Public Relations Officer, SP Adewale Osifeso, disclosed that the suspects had been taken to a hospital for treatment as they sustained critical injuries during the attack.

“As of now, they can’t speak. We need them to be alive to help us with investigation.

“And if it’s true that they stole the bike from Osun State, we will link up with the Osun State Command and it will be investigated,” he added.

OYSG To Support NDLEA In Curbing Drug Use As Agency Destroys Over 16,000kg Of Illicit Drugs