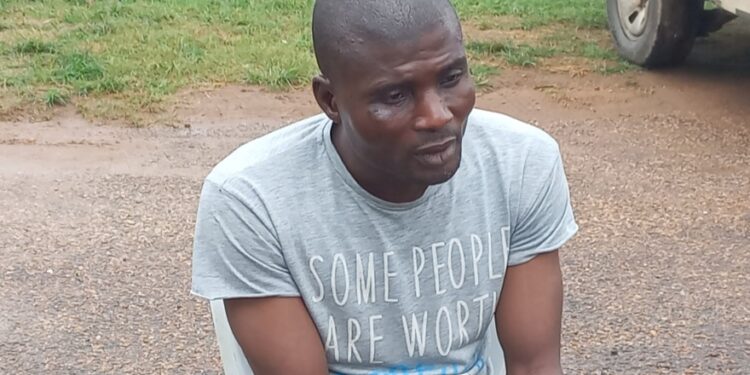 A suspected kidnap kingpin, Olarinde Adekunle has revealed to the Oyo state police command that he threatened to kidnap three students of a private university in Oyo and attack a new generation bank to settle his N20,000 debt.

It was earlier reported that the suspect had earlier sent a handwritten note to the management of a Private University Institution, in Oyo town wherein Adekunle and his gang threatened to abduct three of its students should the management fail to pay up Ten Million Naira within a stipulated period.

The Police Public Relations Officer, Adewale Osifeso who paraded the suspects at the command headquarters, Eleyele Ibadan said the gang also decided to extend a similar hand-written notification to a branch office of a New Generation Bank within Owode Area, Oyo to invade it later in the week.

Speaking with journalists while parading the suspect at the state command, Adekunle who said he was dealing with the motorcycle business insisted that he was owing his friend the sum of N20,000 and he decided to threaten the school and banks to get money to pay his debt.

According to him, a staff of the institution whose he refused to mention his name was owing him a sum of N10,000 but refused to pay him.

He said; “I gave out motorcycles otherwise known as okada to a staff of the institution on loan but he refused to honour the bilateral agreement instead he threatened to deal with me.

“I wrote the letter as a threat but not to kidnap the students as alleged. I am not a kidnapper,” he said.

When asked the correlation between the N10,000 claimed being owed by the staff of the institution and the N10million ransom he demanded in the letter, Adekunle kept mum.

The Vice-Chancellor of the institution who preferred anonymity, confirmed receipt of the threat letter by the suspects.

He said the letter which has caused panic in the academic community was dropped at the gate of the institution.

According to him, “the threat letter was dropped at the gate of our institution with a graphic description of roads leading to the University.

“The author of the letter threatened to kidnap our students if we fail to deposit N10m within a stipulated period.

“We immediately alerted the relevant security agencies including the Police Authority. With their timely arrest, the police have justified the confidence repose in them by the citizens of this Country.”