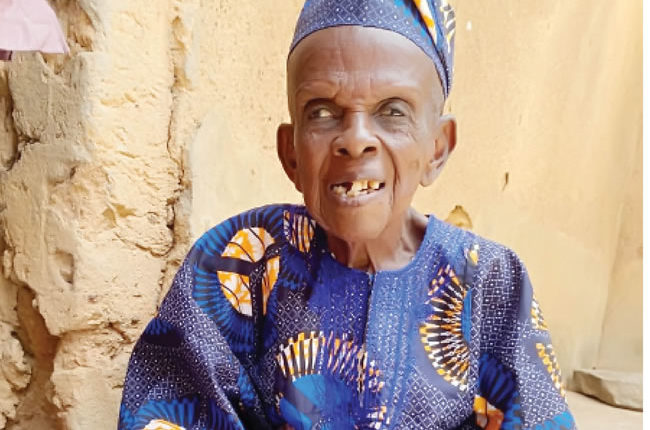 I Was Four Years Old When I Was Brought To The Palace; I Have Served 3 Alaafins —Oldest Palace Aide, Baba Kekere

THE death of the Alaafin of Oyo, Oba Lamidi Olayiwola Atanda Adeyemi III can aptly be described as the two faces of the Yoruba talking drum with a philosophical meaning to the viewers, depending on the side it is viewed from. While the successor to the throne is jostling for the Alaafin stool, the longest serving palace aide, Mukaila Morenikeji, a.k.a. Baba kekere, paints a picture of his lot in the palace with the passage of Oba Adeyemi.  In an interview with Saturday Tribune, Baba kekere speaks on his relationship with late former Alaafins: Oba Adeniran Adeyemi II, Oba Gbadegesin Ladigbolu and Oba Lamidi Olayiwola Adeyemi III.

Since when have you been in the palace?

I was four years old when I was brought to the palace. I was held by my left hand and instructed to sit down at a particular place. The palace then was not as big as it is now. It was Oba Lamidi Adeyemi III that renovated the palace. He built new structures and modernised the palace.

Are you from Oyo town or a neighbouring community?

I am from the Lagbondoko family. I am married with three children but my children do not stay with me in the palace. They live in one of the northern states.

As the oldest palace aide, how many Alaafin have you served?

What was your relationship with all the Alaafins like?

It was cordial but none can be compared with Oba Adeyemi III. There can never be another Lamidi again in Oyo. He treated me like a son. He was responsible for the wellbeing of my children. He took of me whenever I was sick.

What was the difference between Oba Adeyemi and his predecessor?

Oba Lamidi Adeyemi was the son of Oba Adeniran Adeyemi Alowolodu. He became king after the demise of his father’s successor, Ladigbolu II. He was a strong and dedicated traditional ruler. He was compassionate towards his subjects. He hated people being cheated. He was an encyclopedia of Yoruba culture and tradition. He was an educated king. A philanthropist, he was globally recognised unlike his predecessor. He used his influence to attract development to Oyoland. Lamidi ko se ti sigbo, ko se ti sodan, a fi ibi to ba n lo fun rare (Lamidi is focused and can’t be influenced).

What is going to happen now that he has transited?

The future is bleak, I am afraid. I am afraid of people. My benefactor is gone. There is no one like Lamidi. He was my hope and that hope has been dashed. My continued stay in the palace will be determined by the next Kabiyesi. I am empty now with the death of Lamidi. I have to rely totally on God now.

How did you receive the news of Kabiyesi’s death?

I am still in shock. I am still hoping that he will wake up from his deep slumber. Lamidi cannot die. I am ready to take his place. With Lamidi’s death, half, if not the whole of me, is gone.

What specific function(s) do you carry out in the palace?

I run errand for Kabiyesi. At times, I am called to tend to Kabiyesi regarding his meal. Also, I carry out the responsibility of a native security guard, as a hunter. I am a fisherman. These are some of the functions that I carry out in the palace.

What will Oba Lamidi Adeyemi be remembered for?

Oba Lamidi will be remembered for the development of Oyoland and his people. He was so passionate about the promotion of the Yoruba culture. He was caring and loving. He catered for all the palace aides, irrespective of tribe or religion. We, palace aides, are over 200. We are treated equally.

What is your advice for the people, especially the Oyomesi, as they are set to elect another king?

They should preserve the legacy of Oba Lamidi Adeyemi. The development of Oyo town should be their topmost priority.

Do you need any assistance from the government, given your contribution to Oyokingdom?

Anything that God puts in the heart of the governor will be highly welcome.