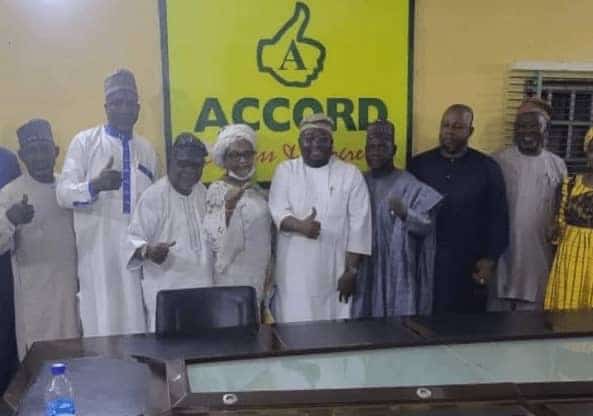 I Will Use Accord to Achieve my 7-Point Agenda If Elected Governor – Says Adelabu, As He Meets Party’s NWC Over Guber Ambition

The National Working Committee (NWC) of the Accord Party has met with Chief Bayo Adelabu over his desire to contest the Oyo state gubernatorial election under the platform.

Sources at the National Headquarters of the party said that the top of the things discussed at the meeting was to allow Adelabu to be the flag bearer of the party in Oyo state.

Insideoyo.com had earlier reported that Saheed Ajadi said he remains the gubernatorial candidate of the party in the state.

You would recall that Adelabu had announced his defection to Accord Party after losing the All Progressives Congress, APC, governorship ticket to Senator Teslim Folarin.

Adelabu, who alleged that the delegates’ list meant for the election had been tampered with, said he left the APC because of injustice, lies, conspiracy and malice.

He said, “It is needless to restate in detail the reason for relinquishing my APC membership on the point that such reason is public knowledge.

“The man dies in him who keeps silent in the face of blatant injustice and the life of a lie is a matter of little time. Evil people struggle in vain in a conspiracy against their innocent fellowman because malice is a poor match for destiny.”

He also said he would use the Accord Party to achieve his seven-point agenda if elected Governor.

His words: “A time exists in the life of a sincere aspiring man of the public when events and circumstances lesson the operation of his mind onto new decision, new desire and new determination.

“Such time now finds expression in my political career, which necessitates change, fundamental decision, and refreshing determination. It is, therefore, on this basis that I hereby declare the withdrawal of my membership from the All Progressives Congress (APC) to Accord Party of Nigeria (Accord).”