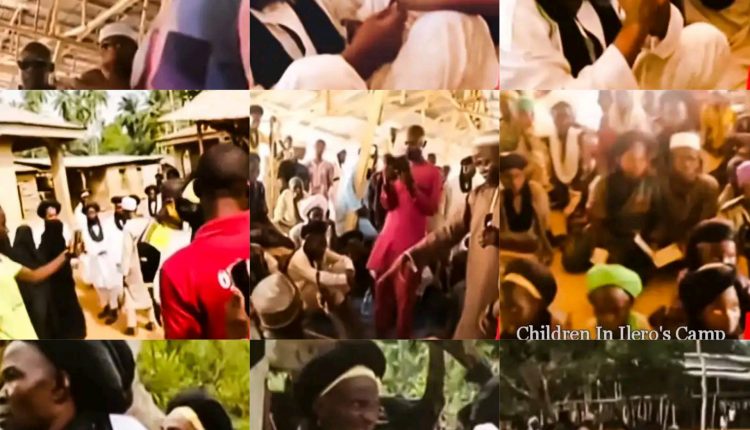 A slave camp belonging to a fake self-acclaimed Khalifa, Najeem Iyiola Ilero which was operated in Ibadan has been invaded by a popular Ibadan based presenter known as Oriyomi Hamzat with family members of some followers of Alfa Ilero, and some Islamic clerics.

They were there with an attempt, to set some enslaved followers under captivity in the camp of Alfa Ilero free.

Alfa Najeem Ilero is someone who has this cool and calm demeanor, but fearful person to his followers because of the strong and uncontrollable feeling of a perceived damage he could cause them, if they go contrary to his belief and set rules within the camp.

He was also alleged to have denied his followers the use of phones, which he regarded as an oracle tool used by a traditionalist. It’s also reported that the Alfa Ilero refused his followers from getting married, but he has above forty (40) wives under his roof. In fact, his followers staying in his camp are living in abject penury while the Alfa Ilero lives in affluence.

Following different atrocious acts being allegedly committed to his followers by the Alfa, as being alleged by some escapees from his camp and families of some of his followers, made a popular radio presenter, Oriyomi Hamzat, and some Islamic clerics to have a hostile confrontation with the self-acclaimed Khalifa, Ilero.

According to the video uploaded on YouTube by Gist Media TV, the self-acclaimed Khalifa could be seen sitting on a bare floor with some of his top members, as the Imam that came with Oriyomi Hamzat to Khalifa Ilero’s camp in Ibadan, continuously confronted him with certain allegations. In the confrontation with Ilero, the Imam said the self-acclaimed Khalifa was a compulsive liar for claiming to be what he’s not.

He’s not a Khalifa of Muslim, and he shouldn’t claim to be one. He was also confronted with the allegation that he claimed after Allah and Mohammed, he’s the next in rank while the third allegation is that he alleged that nobody could confront him because he owns a powerful rod, and it would be disastrous to whoever the rod is stretched at.

The Imam said the aforementioned claims by Alfa Ilero were false, didn’t hold water, and he wasn’t a messenger of Allah as claimed, but a messenger of doom. He said before the confrontation, Alfa Ilero had threatened fire and brimstone upon them, if they could confront him. However, they challenged him to do as he threatened, but he couldn’t utter any word, but was just looking at them.

However, the Imam asked him to look at how blessed he was with followers, which through the influence of false indoctrination and hypnotism were put under bondage. He pleaded with the self-acclaimed Khalifa to have the fear of God because his style of religious belief was contrary to Islam. They implored Alfa Ilero to turn to God and ask for forgiveness, employ the service of a knowledgeable Alfa to teach his followers.

According to the popular radio presenter in Ibadan, Oriyomi Hamzat, he said he had a tête-à-tête with the Alfa Ilero’s first wife and that the wife had good things to say about Alfa Ilero as a good husband that loves his children, but was later possessed with demon. He begged the Alfa to dissuade from leading his followers to hell.

He also talked about the importance of education and how it’s helped him in life. Therefore, he pleaded with Alfa Ilero to set free from his camp many of the children already in his bondage.

At the end, some people at the slave camp of Alfa Ilero, which families came with Oriyomi Hamzat to the camp, were set free from the bondage, as they were made to go home with their families.

Unidentified Man Hangs Self In Ibadan