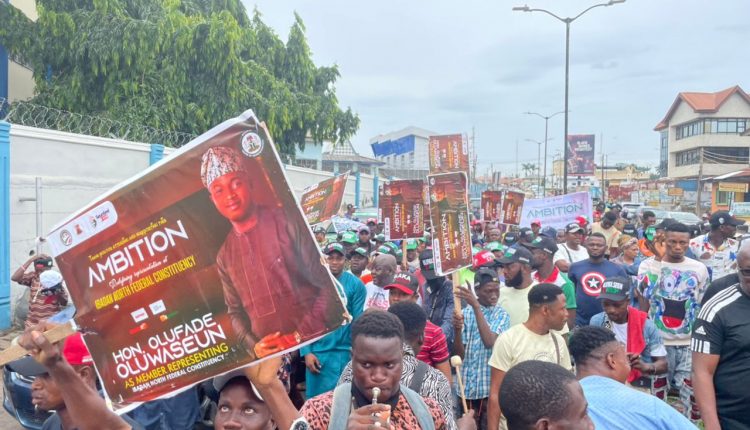 A leading aspirant and for the Ibadan North Federal Constituency seat under the People’s Democratic Party PDP, Hon. Oluwaseun Olufade on Wednesday, 4th May, 2022, officially declared his intention after due consultations to be the People’s Democratic Party flagbearer, and represent the good people of the Federal Constituency at the House of Representatives in 2023.

The largely populated and historic event, which saw the triumphant entry of Oluwaseun Olufade to the venue of the event, with large number of supporters and well-wishers from across the wards in Ibadan North, ignited excitement and fantasies in party leaders, members, residents of Yemetu and passers-by.

At the colourful declaration event, Hon. Olufade sought the support of party leaders, stakeholders, executives, youths, delegates and general members in the realisation of his course of seeking to represent the interest of the people.

He assured them of putting the interest of the people first, bringing home the dividends of democracy through quality representation, provision of jobs for youths (a strata of the party he is representing), investing in human and social development among others.

He thereafter gave an assurance of his continued loyalty and commitment to the party and the good people of Ibadan North Federal Constituency once he assumes office.

He added that Ibadan North federal constituency will be adequately represented with the caliber of candidates vying for the position, adding that whosoever emerged at the Primaries, will be the best candidates to contest against the incumbent and he/she will surely win convincingly throughout the 12wards in the most populous, urban city in Ibadan.