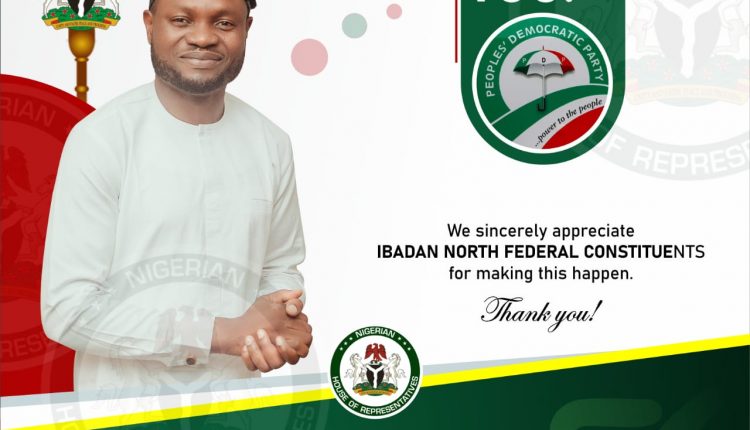 Peoples Democratic Party Candidate of Ibadan North Federal Constituency, Honourable Lanre Sarumi has described his victory as the will of God and commend the fatherly effort of Governor Makinde who ensured that the electoral process in the constituency is used to determine the candidate of the party.

Honourable Lanre Sarumi in his speech lauded Governor Makinde for allowing free and fair primary in Ibadan North Federal Constituency. “He described three years of unbroken relationship the governor have with good people of Oyo State as symbolic and serves as a model of good governance in Nigeria.

He acknowledged Governor Makinde’s contributions to the party which he described as “insightful and resolute inputs to the processes of managing governance in Oyo as well as within our great Party, the PDP”

Governor Makinde concept of leadership enables him to motivate associates and inspire in them confidence and loyalty. His imprints are indelible on politics and governance at the sub-national and national levels in Nigeria.

He said that there were countless reasons to be grateful to God “for allowing the will of people to come into pass” It has been a joyful moment for the teeming residents of Ibadan North, his supporters across the state.

He thanked other aspirants for their believe and committment to the party and party faithful for their cooperation and dedication. “The courage, determination, perseverance will be recharged and we shall build the party unity so as to show love, respect for others and prioritise Ibadan North Federal Constituency development and the State in general”.

He assured the aspirants of his commitment to ensuring a unified house ahead of the general election. “To me it’s a victory for all of us and my response would have been same if it has gone the other way, I believe we are all equally qualified to represent our people”

He further promised the entire people of Ibadan North Federal Constituency of transparency and effective representation.