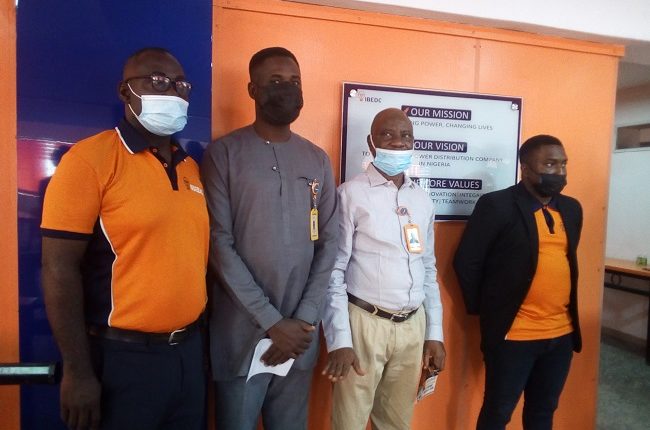 IBEDC disclosed this at a media briefing with journalists at its Ibadan headquarters, Capital Building, Adeoyo, Ring Road, Ibadan, on Wednesday.

According to the Chief Operating Officer, IBEDC, John Ayodele, who was represented at the briefing by the Head, Strategy and Corporate Performance, IBEDC, Peter Oni, the re-launched MAPS followed the directive given by the National Electricity Regulatory Commission (NERC) to give customers the choice to purchase meters.

The COO said the scheme would serve as the best arbiter between electricity consumers and distribution companies without the hassle of estimated billing.

“We want our customers to be aware of the fact that it is no third-party affair; it is between IBEDC and the customer and we want them to cooperate with us and transact their businesses with us. We want it to be in such a way that metering is the arbiter between us and our customers; they will be able to know how much energy they have consumed and we will be able to know how much energy and expected revenue using these meters and by so doing, there will be nothing like they over-billed me,” he said.

The COO also said customers who subscribe to the MAPS, would get a refund of the cost of the meter through the same amount of energy credit whenever they vend over a period of 36 months.

“We have completed phase zero of the NMMP and we are moving to the next phase and from experience on the field, we observed that it was not sufficient for us to meter the expected number of customers we wanted to meter for that period. We have done the MAPS metering system and it worked very well. Some customers are ready and they are willing to actually get their properties metered so that they will be able to determine the quantum of energy consumed and then it will be seamless.

“So this time around, customers have the option to wait till when the NNMP will get to them, which is free, or to buy into the re-launching of our MAPS metering process which they have experienced before and it was a huge success. Let them come in and pay and we are returning that money to them via the energy they consume. As soon as they vend, we give them the cost of the energy over a period of time,” he said.

In his presentation, the Senior Communications Officer, IBEDC, Frank Williams, said the essence of the scheme was to realise the goal of getting all Nigerians and electricity customers metered and give them the power of determining how they pay and make use of energy.

The Head, Project Management Office, IBEDC, Olabisi Daramola explained that the scheme does not allow third-party breach. He encouraged customers to walk into any IBEDC office nearest to them to register for the scheme or visit msm.ibedc.com after which a unique ID will be generated for a technical evaluation of the customer’s premises.

Daramola said once the evaluation is successful, the customer can make payment at any bank branch after which the customer would be metered within 10 working days.

Orerome Ofu, a metering engineer, who represented the Head, Metering Unit, IBEDC, said the company has already secured over 8,000 meters, with 2,000 for each of its vendors and would get more for its customers over time. He also noted that in line with the NERC stipulation, 70 per cent of the meters were locally sourced and manufactured, while those from other sources outside Nigeria have local partners.