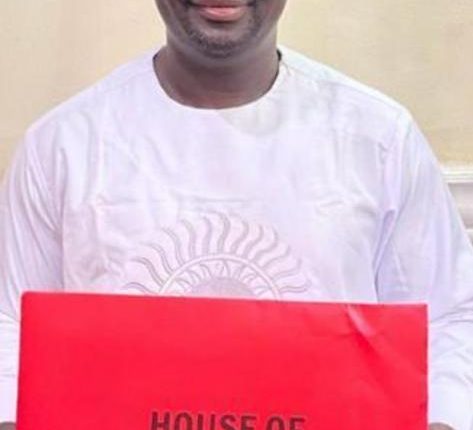 Engr. Femi Adegoroye, Ido born politician has obtained nomination form of the People’s Democratic Party to vie for the party ticket in the forthcoming election.

Engr. Femi who had earlier declared his interest for the green chamber sometimes ago has finally taken the courageous step of picking the form for the contest.

While on a phone conversation with Akedeoyo correspondent, Engr. Adegoroye made it known that the people of Ido/Ibarapa needs viable and competent man to do the job of legislation in the National Assembly and he’s well equiped to deliver to the max.

He decried the state of development in the area which is due to some kind of poor representation in the past that have refuse to direct the attention of the federal government to the area, and he’s ready to make federal government investments housed anywhere around the constituency.

He equally confirmed that the good people of Ido/Ibarapa East federal constituency are fully behind him and are ready to troop out en-masse to vote for him if he could eventually secure the candidacy, as he’s bringing competence and experience from the business world to transform the people’s live in the area.

Engr Adegoroye commend the governor, Engr. Seyi Makinde for the unprecedented development the state and his federal constituency has been receiving under his watch, which is one of his reason to support him in bringing rapid development to the area.

Engr. Adegoroye has a Masters in Business Administration and Project Management from one the best Universities in the world, University of Phoenix, Arizona, United state. With over 15years of experience as a project Manager.

He has been a courageous comrade in the field of struggle, He was the Vice-President for AFSCME, A trained Shop Steward, and trained activist by one of the largest Union in the United States, American Federation of State, County, and Municipal Employees (AFSCME). Engr. Adegoroye effectively represents, employees, negotiate with government for better pay, benefits and good working condition. He speaks for coworkers, He’s is the voice of the voiceless, His wealth of experience in representations make him more qualified to represent the good people of IDO/IBARAPA East.

While revealing part of his plan for Contesting, The Young and Energetic Engr Said he intend to increase access to quality health, Provide portable water, create more job opportunities for the youth, provide business grant for the people and to improve the standard of living of the people in all possible ways.

Engr Adegoroye also use the opportunity to called on Oyo citizens especially Muslim faithful, to seize the opportunity of the Ramadan Fasting to rededicate their lives to service to God and humanity.

Holy Month is a period that calls for a deep and sober reflection on the State of the Nation and the rededication of the entire citizenry.

“I want to particularly congratulate my fellow Muslim brothers and sisters, in particular Ido/Ibarapa East federal constituency, on this year’s occasion of the annual Ramadan Fasting.

“During this period, it is expected of us to be more spiritual, abstaining from all sinful acts, deeds and thoughts. It is a period that requires us to be holy in all our ways and dealings. While also advising them to pray ahead of the forth coming Political season.