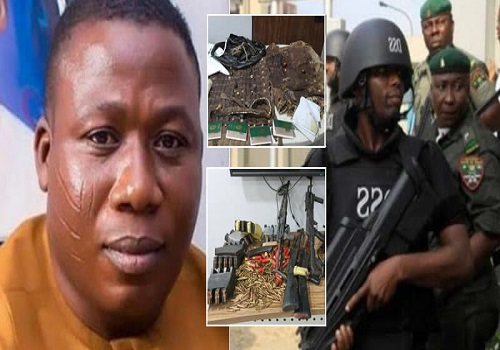 Attorney General of the Federation (AGF) Abubakar Malami (SAN) and the Department of State Services (DSS) have appealed an Oyo State High Court judgment that awarded N20 billion aggravated damages against them for the illegal invasion of the home of Chief Sunday Adeyemo (aka Igboho) in Ibadan, the state capital.

The appellants, in the notice of appeal filed at the Court of Appeal, Ibadan Division, said they were dissatisfied with the judgment of Justice A. I. Akintola on September 17, 2021.

Raising 18 grounds of appeal and six issues for determination, the appellants prayed the court to allow the appeal, “set aside the judgment of the trial court and dismiss the case in its entirety”.

They also paraded 12 people arrested in the house as well as ammunition and material items seized during the invasion.

But the embattled Yoruba nation agitator filed a suit against the duo and the DSS director in Oyo State over the invasion, seeking N500 billion as damages for fundamental rights violation and destruction of his property.

In its judgment, the court granted all the 16 reliefs sought and ordered the AGF and DSS to pay him N20 billion in aggravated damages.

It held that the invasion was illegal and a violation of his rights to privacy and own property.

Aside rejecting the entire judgment, the appellants particularly faulted the lower court’s position that the invasion violated Igboho’s fundamental rights.

They also faulted Igboho’s claim, which the court affirmed, that the DSS personnel shot through the ceiling of the house, depriving Igboho of quiet enjoyment of his house for the period of the armed invasion, thereby violating his fundamental human rights against compulsory acquisition of his property and privacy.

The AGF and DSS also objected to the conclusion of the court that the invasion was “oppressive, malicious, arbitrary and grossly unconstitutional,” simply because of the claim that the DSS invaded Igboho’s house without announcing who they were and without asking him to open his gate but rather shot their way through, killing two people in violation of his rights.

They further objected, among others, to the court’s position that it is inequitable and unfair for the DSS to exhibit guns, ammunition and other dangerous weapons and incriminating documents in public and claim that the same belong to Igboho when the DSS personnel actually shot their way into the house without subjecting them and their convoy of vehicles to prior search by Igboho who neither signed any inventory nor search warrant containing inventory to that effect.

Other specific reliefs granted by the lower court but which the appellants objected to include the media trial by way of exhibiting prohibited or illegal items before the media as belonging to Igboho which the court held as usurpation of judicial power reserved for courts by the constitution and “violently violates Igboho’s right of presumed innocence until proven guilty by a court of law as prescribed by the constitution.

They also faulted the order directing DSS to return Igboho’s personal belongings which were seized during the invasion except “guns and ammunitions harvested by them from their armories including two guns belonging to police escorts of one of the guests of the Applicant and purporting same to be Applicant’s (Igboho’s).”

They generally faulted the judgment, stressing that the judge erred in law by assuming jurisdiction on the matter whereas three of the reliefs sought “are torts of malicious damage/invasion of property of the respondent” while two of the reliefs also sought by Igboho were not for enforcement of any fundamental right recognised under Chapter Four of the constitution.

They also insisted that the trial judge erred in law by assuming jurisdiction over the suit even though he “commenced the suit via a wrong mode of commencement.”

Specifically, the appellants posited that the judge erred in law when he assumed jurisdiction and wrongly affirmed “the purported right of the respondent to campaign for the creation or establishment of Yoruba nation or Oduduwa Republic in Nigeria, when the constitution prohibits the divisibility of Nigeria.”

They also argued in the notice of appeal that the judge erred by relying heavily on Igboho’s witness Hamza Bashiru Ariyo’s evidence, which they described as an improperly admitted evidence. They described the decision as a miscarriage of justice against them.

In the six issues raised for determination, the AGF and the DSS want the appellate court to declare that Igboho’s major claims were not founded under Chapter Four of the constitution, that the lower court was wrong to have assumed jurisdiction over a complaint that was purely against the decision of a Federal Government agency.

Others are that Igboho’s originating process which was supported by two affidavits was incompetent with regard to Order II Rule 3 of the Fundamental Rights Enforcement Procedure Rules 2009; and that the judge was wrong to have held that Igboho has the statutory and constitutional right “to propagate the establishment of the Yoruba and Oduduwa nation in Nigeria.”

They further prayed the appellate court to hold that the allegations against Igboho were such that would warrant the DSS personnel to carry out a sting operation on his house.

Igboho has been detained in Cotonou, Benin Republic since July 19, last year without any criminal charge.