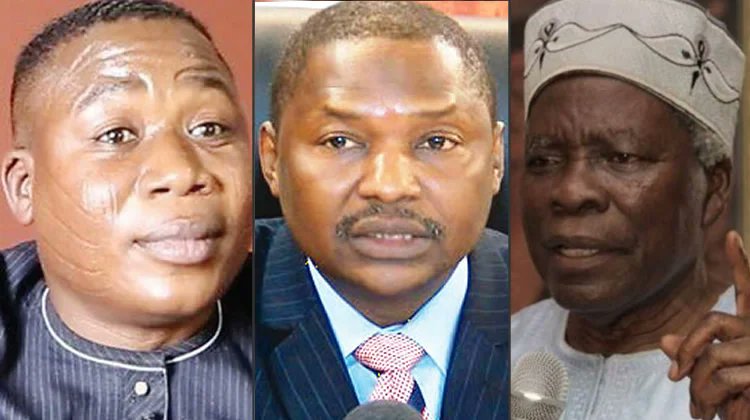 The umbrella body of the Yoruba self-determination group known as Ilana Omo Oodua on Thursday insisted that embattled Yoruba Nation agitator, Sunday Adeyemo, also known as Sunday Igboho, committed no crime by agitating for secession from the Nigerian State.

The group led by 86-year-old Professor of History, Banji Akintoye, said the regime of the President, Major General Muhammadu Buhari (retd.), must first ensure the release of Igboho from a prison in neighbouring Benin Republic before talking about any “political solution”.

Akintoye’s spokesman, Maxwell Adeleye, made this known in an exclusive chat with The PUNCH on Thursday.

He was reacting to a statement made by the Attorney-General of the Federation and Minister of Justice, Abubakar Malami (SAN), that the Federal Government might consider all kinds of solutions, including political ones, in order to resolve the crisis surrounding separatist agitations in Nigeria.

Malami had made the statement in an interview aired on ‘Arise TV Special’ on Wednesday.

Of late, growing dissatisfaction, disaffection, and perceived injustice have fueled secessionist agitations in Southern Nigeria. While Igboho is an arrowhead of Yoruba Nation agitation in the South-West zone, embattled Nnamdi Kanu leads the proscribed secessionist group, the Indigenous People of Biafra in the South-East.

Kanu, who is in the custody of the Department of States Service since his arrest in June 2021, is facing terrorism-related charges before Justice Binta Nyako of the Federal High Court in Abuja.

On the other hand, Igboho, whose Ibadan home was raided on July 1, 2021, around 1am, has been in a detention facility in Cotonou since July 19, 2021. Two of his aides were killed by the DSS during the midnight raid. The agitator went underground after he was declared wanted by the secret police but he was reportedly arrested by the Interpol at the Cotonou airport at the behest of the Buhari government. Igboho was apprehended while he tried to escape to Germany.

When asked on Wednesday whether the Buhari government was considering “political solution” to resolve the secessionist agitations in the country, Malami said, “As far as the security situation is concerned and as far as governance and this administration is concerned, you cannot rule out all possibilities. But crime is a crime; there are criminal undertones associated with certain conducts, you cannot away the rights of the government to take steps with particular regards to ensuring that the people are brought to book.”

“We will look into it (approach) for the purpose of looking at its weight, the authenticity of it, the good faith associated with it and then bring about the considerable factors relating to the negotiations or otherwise.

“So, it is not a conclusion that one can outrightly make without juxtaposing associated facts relating to the reconciliation; there has to be an approach and then a counter consideration,” the AGF added.

Malami also said the financiers of Kanu and Igboho in the National Assembly and amongst the elite would soon be unmasked.

We are focused on Yoruba Nation agitation, says Ilana Oodua

However, while speaking with our correspondent, the spokesman for the Akintoye-led group, Adeleye, said the AGF must clarify what he meant by “political solution”.

He said, “We have read what the AGF said about not ruling out political solution but he needs to clarify what he means by that. Does he want us to come and beg the Nigerian Government or approach it when Igboho and other Yoruba Nation agitators have not committed any offence?

“Our position is that Malami should clarify himself. However, Igboho has not committed any offence and there has not been any charge from the Nigerian government against Igboho in the court.

“We are focused on our agitation. However, if the Nigerian Government open up to dialogue on how we can peacefully actualise our aim, we are open to it. The release of Igboho will also be part of the negotiation. If we want to have that discussion, Igboho has to be on the seat in the dialogue meeting.”