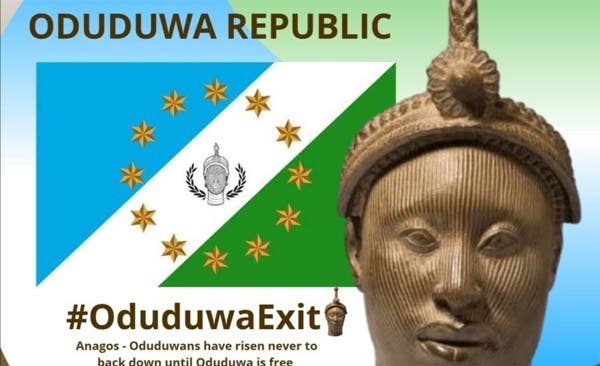 Ilana Omo Oodua To Police: We’re Not Going Back On Our Pro-Yoruba Nation’s Rally Tomorrow

*ays “Any Attempt to Stop Our Peaceful Assembly Shall Be Challenged Logically, Legally and Internationally”

The apex body of Yoruba Self-Determination Groups, Ilana Omo Oodua, on Friday, described the threat by the Nigerian Police Force to stop the Pro-Yoruba Nation’s rally being planned by the organisation On Saturday in Abeokuta, the State capital as a declaration of war against the constitutional rights of the Yoruba people for self-determination, peaceful assembly and speech, warning that any attempt to stop the rally shall be challenged legally, logically and Internationally.

Promising to be peaceful, lawful and make decorum its watchword throughout the duration of the rally tomorrow, the Group, being led by a second republic member of the senate and renowned Professor of History, Banji Akintoye, called on organisations such as the Amnesty International (AI), Human Rights Writers Association (HURIWA), Nigerian Union of Journalists (NUJ), Nigerian Bar Association (NBA), Committee for the Defense of Human Rights (CDHR), International Press Council (IPC), Socio-Economic Rights And Accountability Project (SERAP) and all local and international media organisations to attend the rally as observers.

Reacting through a statement signed by its Media and Communications Secretary, Mr. Maxwell Adeleye, Ilana Omo Oodua described the claims by the Ogun State Police Spokesperson, Mr. Abimbola Oyeyemi, that previous rallies organised by the organisation were violent, as absolute mendacity, and a fallacious attempt to paint the organisation in a bad light.

“We read with total disbelief, a statement credited to the Ogun State Police Command that our Pro-Yoruba nation Nation’s rally scheduled to hold in Abeokuta, Ogun State capital tomorrow will not be allowed to hold. We want to believe the statement of the police is a joke. However, if the Police were serious about the threat, we want to let the authorities in Ogun State know that our rally will go ahead as scheduled because the police have no power under the law to deny us our rights to self-determination and peaceful assembly.

“We at Ilana Omo Oodua considers the statement as a declaration of war against our rights to self-determination, peaceful assembly and speech as guaranteed by the United Nations and African Union Charters on Human Rights which Nigeria is a signatory to.

“We want to assure the police that we shall hold our demonstration very peacefully, lawfully and orderly tomorrow, and we warn that any attempt to stop the rally shall be challenged legally, logically and Internationally.

“More also, we say, for the sake of those who may have been cajoled by the claims of the Police that previous Pro-Yoruba Nation’s rallies in Ogun State were violent and disturbed the peace of the state, that Ilana Omo Oodua, under the leadership of Emeritus Professor Banji Akintoye, has never been violent in its approach, and the facts are out there already.

“To assure the police that we are indeed peaceful, and we shall continue to be peaceful, lawful and orderly, we hereby use this opportunity to invite organisations such as the Amnesty International (AI), Human Rights Writers Association (HURIWA), Nigerian Bar ASSOCIATION, Nigerian Union of Journalists (NUJ), Committee for the Defense of Human Rights (CDHR), International Press Council, Socio-Economic Rights And Accountability Project (SERAP), all local and international media organisations to attend the rally tomorrow as observers”, the statement, concluded.