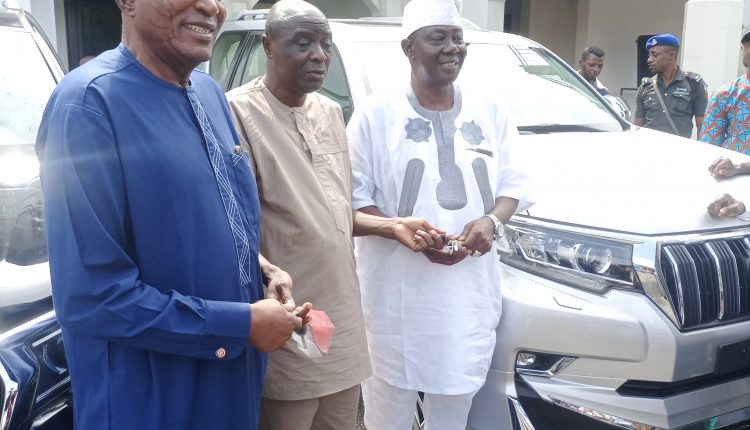 Sen Hosea thank the Governor for the wonderful guesture, addressing Newsman, he said it is visible to the blind that our party remain peaceful, today we witness another history, two son’s of Oke-Ogun handing over power to each other, he admonish their maturity, and urge them to continue to be a good examples.

Chief Kunmi Mustapha appreciate the Governor Makinde for the kind guesture, in his words “Since my sourgon in politics I’ve never seen an outgoing chairman with his successor at the same page, to be hosted like this, he hail from Oke-Ogun were i also come from, aside been my brother we share the same ideology, I’m glad that power came back after 8years as opposition to PDP in my time as the chairman, I came from a different group right from inception, but you can hardly notice any difference in us, My time as the chairman was a family Affairs, the governor has given us everything neccesary to succeed as a party, I’ve absolute trust in him, i pray he surpasses my records.

When asked what is his message to the incoming State Executives

He said all i can say is that they should love each other, and never allow anybody to come in between them, the same peace that has earned us the glory today is all they need to succeed. I came from a different group, the candidate for the election of my group was not the governor today, but we worked harmoniously to achieve what we’ve been able to do today, I pray that God who make it possible in my time will also make for him as well, today I’m leaving as winner, and I’m handling over the victory to him.

Hon Dayo Ogungbenro also thank Oyo State Governor for the gesture, I was called yesterday to come to Ibadan, i never knew anything of such is waiting for me, I’m filled with joy, today is historical in the history of our party politics, i want to thank my elder brother chief Kunmi Mustapha for the love and understanding.

When asked by Newsman what the Party Faithfuls should expect from him,

he replied They shouldn’t expect nothing less, because the governor has set the tray, We have no choice than to be focused, because the governor himself is focused, Politics they say is Power, and power is the basis of development, For the first time after the time of Awolowo and Bola Ige, We have seen what politics is all about, the era of six months deficit of salary, infrastructural, Health, Education deficit is gone forever, The people should expect more, because our leader Makinde and the leader of our party in the southwest are focused.

When asked if he will accommodate the Aggrieved Members back to the Party,

He asked?
You mean the alledge aggrieved members?

Why not we will do everything Within our powers to accommodate them back, our Governor has rightly said that at Adamasingba, that the Umbrella of our party is big enough to accommodate us all,
together we will be stronger.

He also urge all residents of Oyo State to support the administration of Seyi Makinde, will promising to run an all inclusive party System of Administration.