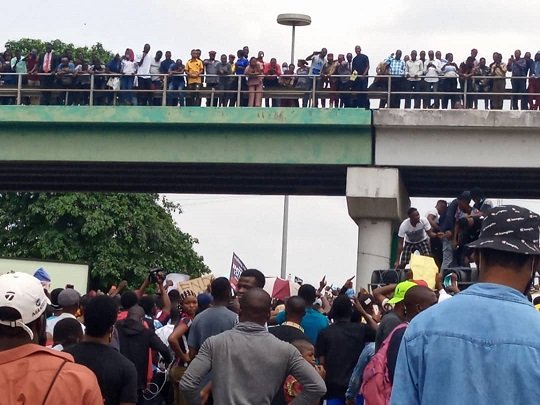 I’m With You 101 Percent, You Are Nigerian Youth, You Are Not Lazy—Makinde tells EndSARS Protesters

The Governor of Oyo State, Engr Seyi Makinde, has declared his ultimate support for the on-going nationwide protest against the brutality of Special Anti-Robbery Squads.

Th governor stated this while addressing the protesters at the State Secretariat, Agodi on Tuesday, after his condolence visit to the parents of the young man, Jimoh Isaq, who died as a result of gun shot by the Police Officers during a protest at Ogbomosho on Sunday.

He advised the protesters to appoint leaders who will seat with government officials to discuss the way forward so that normalcy can return to the State.

He said: “I will have been with you earlier. I had to go to Ogbomosho. I went there to see things myself and also meet the Soun of Ogbomosho and also visit the families of those who lost their lives.

“I am with you 101 percent. I want to thank you because you are Nigerian youths and you are not lazy. You are not hoodlums. You did not vandalize anything.

“I want to tell you that it is not only about SARS. There is hunger, unemployment.

“As leaders , we have to do more to be productive. Peaceful protests are guaranteed under the law.

“I want to beg you all the detained protesters will be released. I have spoken with the Commissioner of Police and the Attorney General but we can not do some things in an atmosphere of chaos.

“I have the Connissioner of Youths here. He will sit and engage with your leaders.

“As a government in Oyo State, we have to find the means to diffise the tension and one of the things we have to do is constructive engagement and we have to do that soon.

“The Inspector General of police said SARS has been disbanded and I said in Oyo State I don’t want any further loss of live. We have asked that the police should take the back seat. We must take the responsibility.

“There will be palliative that the government will roll out within the next one week.

“What I will say is that all the stakeholders must find people to represent them. If we have all of us here, there is no way you can hold us accountable to whatever we want to do unless you engage us.

“I have had an argument where somebody said we have to use force, I said no we can’t because when I wanted to look for vote, you organized yourself and voted for me.

“The major thing is that we need to provide employment. I am with you. I identify with and collectively we will make our state and country better.”