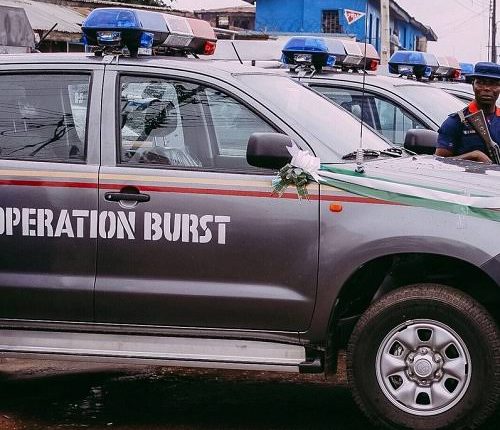 The Suspects were arrested following a distress call made by a resident of Adeniji Street, off Liberty-Road, Oke-Ado area.

The Suspects were sighted when trying to gain access into an Infinity SUV parked on the street with a master key the sole aim of moving the vehicle away.

According to Tribune Online, some residents have been lamenting how thieves have been invading the area, stealing automobile items such as car battery, tyres among others.

One of them who spoke on the condition of anonymity told the Tribune Online that: “We do not know what we do to these people. They have been invading our area for quite some time now. Residents have lost valuables to their nefarious acts.

“That was the major reason we have decided to be closing the gates leading to the street at 8 pm every day. Before these two guys were caught, another resident told us that he saw some guys this morning attempting to gain access into a Toyota Corolla car parked on the street, but after raising an alarm they fled. The experience in the hands of these terrible guys has not been palatable and we want the security architecture in the state to please beam a searchlight to our area.”