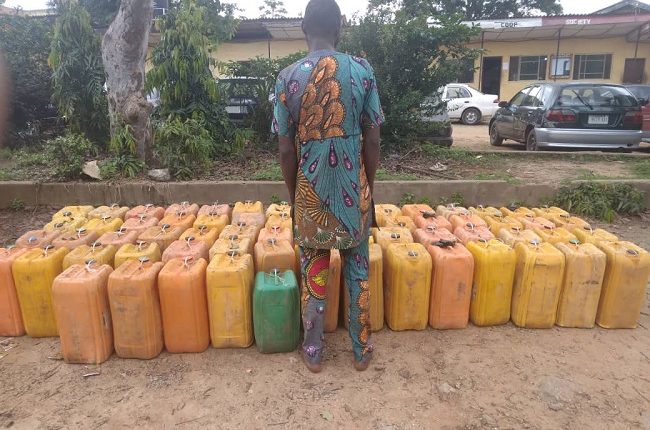 He was intercepted, on Thursday at about 1:25 a.m. on Ogboro-Saki Road.

The suspect, an indigene of Saki in the Oke Ogun area of the state, reportedly loaded the kegs of PMS product in a black Golf car with registration number AGL 17 AY Lagos for diversion to the Republic of Benin.

Parading the suspect at the NSCDC state command headquarters at Agodi GRA, Ibadan, the Commandant, Adaralewa Michael, frowned at such act, warning that the command would not leave any stone unturned in dealing with those determined to sabotage the nation’s economy.

According to the commandant, “it is better for all the criminals who think they want to stay in Oyo State to perpetrate their acts to have a rethink and look for legal means of working, as they must be made to know that there is a new Sheriff in town.”

Adaralewa said that that the suspect would be charged to court after the conclusion of the investigation by the Intelligence and Investigative Department.

He admonished the general public to work closely with the NSCDC and other security agencies in the state so that they would be served better to enhance the economic growth of the state and country at large.

He also promised adequate 24-hour patrol throughout the ember months and beyond.