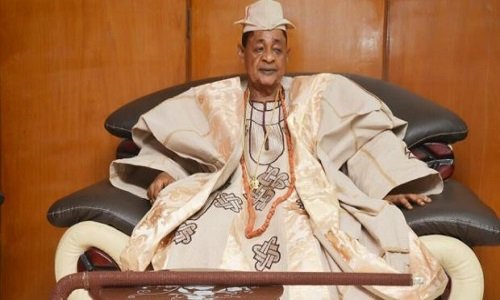 The Alaafin of Oyo, Oba Lamidi Adeyemi, yesterday, expressed displeasure over the dimension insecurity has taken in Nigeria even as he insisted that bandits and kidnappers now have monopoly of violence.

Adeyemi, who disclosed this in Lagos during the 51st birthday celebration of the Aare Onakakanfo of Yoruba Land, Iba Gani Adams, said that monopoly of violence should be carried out by government but regrettably, that was not the case.

Adeyemi, who commended Gani Adams for his steadfastness and doggedness in the struggle for the liberation of Yoruba race, said he has truly proved the gods right that his appointment was divine, He said: “Gani Adams’ appointment is divine and based on merit. He didn’t contest for it neither did he struggled for it. He was divinely appointed and my prayer is that you will lead Yoruba race for a longer time.”

Also speaking at the event, Chairman of the Nigerian Governors’ Forum and Ekiti State Governor, Dr. Kayode Fayemi, who was represented by his Senior Special Assistant on Tourism, Amb. Wale Ojo Lanre, said that all Nigerians need to play active roles in addressing security challenges confronting the country.

He insisted that with love and unity, all the issues fueling agitation in the country will be a thing of past.

He said: “We all need to play active roles in addressing the current challenges confronting the country, with love and unity, the issue of kidnapping, killings that is going on across the country will be a thing of past.”

On his part, GovernorYahaya Bello of Kogi State, who was represented by his deputy, Edward Onoja commended Aare Adams for his courage and doggedness in uniting the entire descendants of Oduduwa saying “We thank you for holding the land together and preserving it from experiencing war, aggression and disintegration. With people like you we believe that Nigeria will experience security, unity and prosperity.”

Appreciating all the personalities and dignitaries that grace the occasion, Iba Adams said that the COVID-19 pandemic didn’t allow them to have an elaborate celebration, saying “we only manage to do the thanksgiving last year. Today, I give glory to almighty God for His grace to celebrate new age.

“In commemoration of my 51st birthday, I am giving scholarships to four indigent students from four different universities, namely, University of Lagos, University of Ife, University of Ibadan and Lagos State University to encourage our students to take our Yoruba language serious so that it will not go into extinction.”

JOB ALERT: CTY Group Of Schools Is Recruiting In Ibadan (SEE HOW TO APPLY)