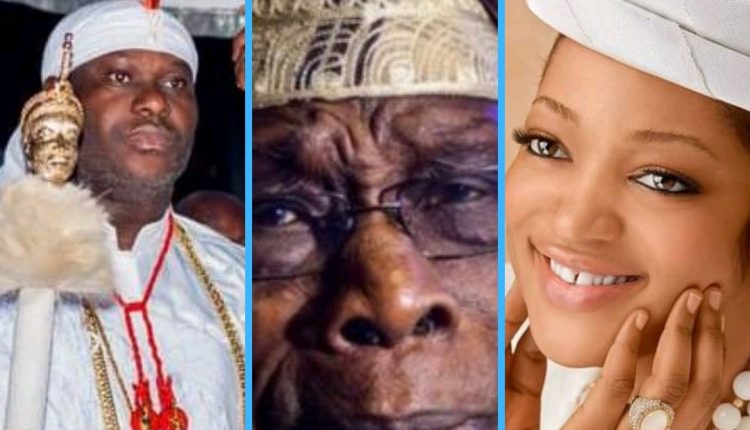 Emerging details have it that elder statesmen and custodians of cultures who are very particular about protecting the reputation of the revered throne of Ife -and the current occupier, Ooni Adeyeye Enitan Ogunwusi have moved to take care of the latest story of collapsed marriage erupting from the palace.

Details available revealed that the peacemakers trying to salvage the marriage of the Ooni of Ife are led by former President Olusegun Obasanjo.

“Baba (Elder) Obasanjo has always been watching out for the Ooni. He has a very serious influence on the revered King. He immediately swung into action when the story broke yesterday. He has been hard at work to ensure the royal marriage is salvaged” SocietyNow.Ng gathered.

More details have it that Obasanjo who is arguable the most respected African leader abroad is joined in the peacemaking efforts to restore the marriage of Ooni of Ife to estranged Queen Silekunola by the likes of Otunba Iyiola Omisore, Erelu Abiola Dosunmu, and very regarded Sir Alex Duduyemi and other major players here and there SocietyNow.Ng learned.

SocietyNow.Ng gathered that Sir Alex Duduyemi is playing a major role because he was with Ooni at an “engagement” in Lagos when the post by the Queen announcing the end of the marriage that has pronounced a son – Prince Tadenikawo – hit town.

“The Queen left the over refusal to abide by the King’s decision that it was time for her mother and six siblings who moved into the place with her 3years ago to take up residence outside her marriage. She insisted she goes everywhere her mother does and left with her mother when the Ooni refused to backdown on his decision” SocietyNow.Ng learned.

Added digs have that the current claim about “hacking of the Queen’s social media pages” by the palace of the Ooni is the product of the “intense efforts” by Chief Obasanjo and others to salvage the royal marriage.

Makinde Reels Out Achievements — How We Increased IGR From N1.9bn To N3.3bn Monthly in Less Than 3 Years