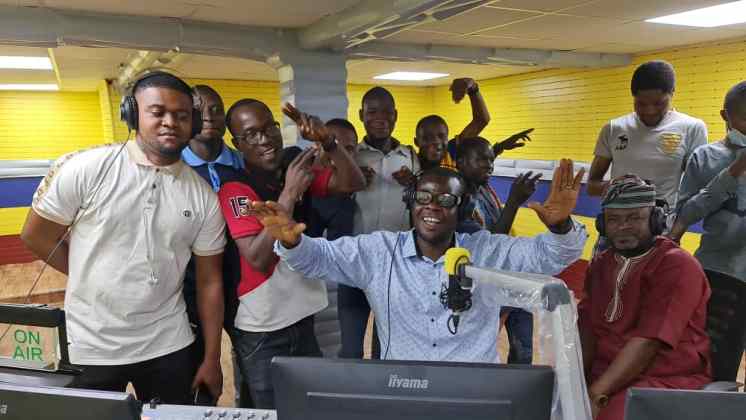 OYOINSIGHT.COM’s Publisher, Sikiru Akinola, was recently conducted round facility at Agidigbo 88.7 FM, Ibadan, which is to be formally commissioned today. He sat down with the proprietor, Oriyomi AbdulRahman Hamzat, a popular OAP himself, to unravel his broadcasting journey. Excerpts:

When did you start thinking about having your own radio station?

A long time ago. You know Alhaji, my father, worked at NTA. When he went to Hajj before 1999, he bought some equipment and expressed interest in disengaging from NTA and being on his own but unfortunately he could not.

Since I started broadcasting, I have always been interested but I saw it as a huge project. Infact, Bebe Islam was originally planned to have a radio station. I went to Abuja and I was informed that a religious body can’t be issued a license. I now decided that I will have a radio station of my own. I first established an online one because I didn’t have the capacity. I once worked with Yinka Ayefele briefly. When I was there, I was also a presenter at Petals FM. So, Ayefele told me he does not want me to work like that; that I should rather stick with one radio station or work on establishing mine. He told me to go and think about my own project. From there, I started my online radio. I had issue with some people and DSS officials invaded my studio; they carted away all my equipment which are yet to be returned till today. When I returned, I had to buy new equipment, those ones also got burnt not long ago.

Meanwhile, I was already preparing for my terrestrial station. So when my online station got burnt, I decided I will not go back online. I told myself that if God wants me to have a radio station, he knows how he will do it. I felt like there are now too many online radio stations and it has no value again.

There are like 42 radio stations in Ibadan. What different things are you bringing to the table?

If you look at the back there, you will see two Mikano generators. We will use them interchangeably. Those who had radio stations before me prepared differently from the way I am preparing because what they met is different from what I met. You know when my brother came, there was only one private radio station. When the first private radio started, it met only government-owned radio stations. So he knew where he will go in through.

This Agidigbo FM radio station is the first owned by a veteran and professional broadcaster. That alone gives me an edge over every other radio station. It’s not that it’s a business. To me, it’s a passion. Someone asked me when I will be able to recoup my investment in this station back, I smiled and said, ‘it’s passion’. If not for passion, I could have easily invested the money in a more profitable venture. But to me, owning a radio staion will always be the most fulfilling thing.

I had issues with the government back then but the masses didn’t have the power to fight for me but they made it clear that I have their support the day I was released. It is the duty of the media to put the government on their toes.

If truly, I get this with God’s grace without collecting money from anyone, there is no reason why I should bend the truth and I know people like the truth but people are scared of saying it. But when I stand by the truth, no radio station will surpass Agidigbo radio.

You said you want to stand by the truth but you know while you were online, you had no address. Now that you have a known place to call yours, will you still be able to fight for the masses like before?

Anyone God creates like me should explain to his wife and children the risks involved. God created this, anyone who says he will demolish this place is with God. As long as I am with the truth, I will always come out victorious. I will not compromise. I swear by God Almighty. I will serve the masses like never before. We want the masses to benefit from our programmes. We will respect their voices and educate them.

When you look at the calibre of people we have brought on board like Ajibola Akinyefa, myself and others, you would will see we are with the truth.

Mentorship is becoming hard these days. What are your plans regarding this?

I was disappointed when I wanted to start. Initially, I had no plan to employ established names whenbecause I had hands that can do this job. So when I got the license, I said I want raw talent and gifted people who only needed to be polished. We auditioned 300 persons and were able to pick only 2. I was disappointed. What disappointed me was that they even studied media related courses. So we have registered a school of practical broadcasting named after my father. We have liased with Channels and TVC. Radio Nigeria is also ready to work with us. What we intend is that we have a studio for training and once we discover they are good to go, we give them airtime. We want to centralise all our training on NBC codes.

Tell us how you started your career.

I came from a broadcasting family but I was never interested in it. I always wanted to be a medical doctor. I was a pioneer student at School of science, Pade. I have a bad handwriting and got admission very late. During that period, I learned fishery and worked as a fuel attendant in the evenings. WAEC withheld my results like six times.

My first admission was to study linguistics at UI in 1997 but I went to study geology at The Polytechnic, Ibadan. After completing my national diploma, I was convinced by my father’s colleague to go into broadcasting and take up his legacy. So I went for another ND in mass communication at the Eruwa campus of Poly Ibadan. After then, I proceeded to UI for a degree in linguistics, with Yoruba option. While at PolyIbadan, during my SIWES, I came to PolyIbadan and learned programme presentation from Lere Shittu and jingles from Demola Adeniyi.

It was Shittu that called me one day and said “you have a residual talent”. That was when he took interested in me and I started featuring on one of his programme. I started gradually.

I once trekked from Ibadan to Eruwa. I was almost in Eruwa before getting a free bus. But that is a story for another day.

I wanted to come to BCOS for my one year IT but was not accepted so I went to Guardian and worked as an advert assistant. After some time, I was given a full time appointment but I rejected it and said, ‘I can’t do a job that will not include radio presentation.’

On my way home, I saw one of my brothers named Taoheed. He had a youth group back then supporting Kolapo Ishola, a former governor. He told me Ishola told them to find a creative idea and any youth that brings the best idea forward will be commended. On our way, the next day, I started criticizing then governor Lam Adesina creatively. Late Lam Adesina was contesting the 2003 election against former governor Rashidi Ladoja. After the election, I was working with one of the lawmakers at House of Assembly. He later became the deputy speaker. After a time, I told him the only reason why I came to work for him was to be able to secure placement in BCOS.

So that day, he took me to BCOS and I was appointed a freelance broadcaster. From BCOS, I went to Amuludun. Then I went to Petals. Later on Fresh FM and so on.

Is any of your children interested in this job?

My children are still quite young. Though one of them was initially interested but after I was locked up, he said he was not interested any longer.

How much did it cost you to put this place together?

I put in for a license for the first time in 2002. I was told space was not available in Ibadan and not entitled to collect the form. After Splash FM was approved, I wrote back and applied again about 8 years later. I collected the form and was not able to process it for several years. This one came very fast. Let’s just thank God for everything.