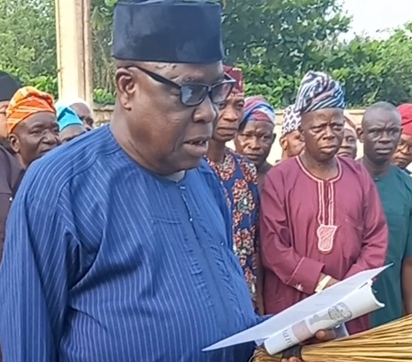 INTERVIEW: We Formed Parallel Excos, Can’t Continue To Look When They Use “Jagba” For Us — Abu Gbadamosi

In another twist to the crisis to the Oyo State chapter of the All Progressives Congress (APC), Alhaji Abu Gbadamosi was last Friday inaugurated as Chairman of the Oyo APC. In this interview, Nigerian Tribune’s WALE AKINSELURE speaks with Gbadamosi on what informed the inauguration after Isaac Omodewu had earlier been inaugurated as the Oyo APC chairman.

Last Friday, you were at the Trans Amusement Park, Ibadan, where new executives of the Oyo State chapter of the All Progressives Congress (APC) led by you were inaugurated. Why that action, considering that another executive council led by Isaac Omodewu had been inaugurated some weeks ago?You should be aware of what is going on in the APC in Oyo State. That executive council that was inaugurated the other time was illegal. The matter is in court. Consensus was upheld in our party and that position was not zoned to Itesiwaju from where that man came. We went to Otu, his home town; we held meetings. It is clear to everybody, even to the opposition; they know the correct thing.  They have used the “jagba” but we cannot continue to look at them. We are forming a parallel executive then the national body will come and resolve the issue. We cannot allow them to do that. In progressive politics, you don’t do that. There is a process in doing things. You can not build something on nothing and expect the process to stand. You don’t have base, how do you fly? We have tolerated them for long that is why people said I must be sworn in. You should know how the list of delegates was mutilated. The party hierarchy has put up new executives at the centre and they will come and see what is happening here. All states that there were crises were not allowed to vote at the convention. There is crisis in Oyo. Those people cannot fly and that is why another swearing-in happened. We now have parallel executives in Oyo.

The then Mai Mala Buni leadership of the party inaugurated Isaac Omodewu as Oyo APC chairman in Abuja. Who inaugurated your own executives?

The party membership did. A lawyer conducted the swearing-in for me. Buni had said that that congress held then was unrecognised; he did not approve it and he apologised. The matter is in court but we are adopting both the legal and political means. This is to tell you that we are very serious because we won’t allow it.

Are you the one declaring the inauguration of the Omodewu-led executive illegal?

It was illegal. How can you build something on nothing? How do you build a house with no foundation?

The Omodewu-led executive council was inaugurated several weeks ago. Why is your own action just coming?

We are interested in peace. We had hoped that reason will prevail. I believe you are conversant with what happened at the national level with regards to how Buni was on his way out and how he came back in. But, I believe the present executive will see to what happened here. It was very illegal and unacceptable.

But, it was the Omodewu-led executive council that mobilised delegates to the convention and was also invited to the platform as Oyo APC chairman.

Which delegates? I said delegates that emanated from states with crisis were not allowed to cast any vote. It was consensus. You (journalists) have a role to save this country. Our generation should not suffer. We should believe in what is transparent and honest. Is what happened in order? The majority of people in the Oyo APC know that something is very wrong. We want to stand and fight all these sort of things. I don’t know whether Omodewu was there or not. I don’t have any quarrel with Omodewu. We will meet in court. We have filed our papers. Before we filed our papers, we remained silent hoping for some redress. Those who did that shabby thing have gone away with ignominy. Look at the Secretary of the Caretaker Extraordinary Convention Planning Committee (CECPC) and those who perpetrated all these atrocities. You (journalists) should bring up such issues so that people will desist from such things.

If you were in Abuja for the convention, in what capacity were you there?

So, you have formed parallel excos such that we have two Chairmen of Oyo APC.

All I know is that I am a Chairman for the APC in Oyo State. If Omodewu wants to rival this, no problem.

Who are those party members you are chairman over?

So many gubernatorial aspirants have said Alhaji Abu Gbadamosi is their chairman. Do your research, I have the majority of party members in Oyo State.

How EFCC Officials Broke into Our Hotel Rooms, Seized Phones, Drove Away Cars in an Ibadan Hotel — Lady Reveals