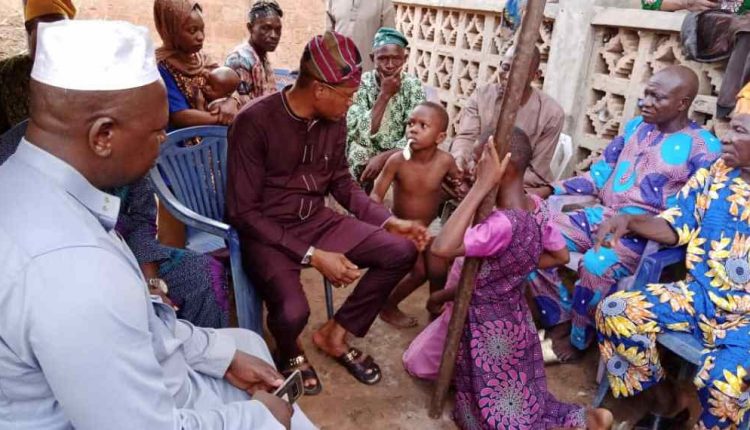 A member of the House of Representatives representing Iseyin/Itesiwaju/Kajola/Iwajowa Federal Constituency, Oyo State, Hon. Shina Peller, has granted scholarships to the children of the slayed Iseyin residents who were hit and killed by the stray bullets of the officers of Nigeria Customs Service on Friday during Eid-fitri celebration.

Hon. Peller made the announcement during his visitations to the families of the deceased in Iseyin on Sunday, where he also expressed his sadness about the ugly occurrence, consoled the families and prayed that God gives them fortitude to bear their loss.

The first family Hon. Peller visited was Tobi’s. Tobi, one of the deceased, died leaving a wife and three children behind. After consoling the wife and family with encouraging words, Hon. Peller then instructed his personal assistant to immediately add the three children to the list of the students on his scholarship scheme.

In the same vein, the federal legislator visited the family of another deceased, Wasiu, at Woru Compound, Koso in Iseyin local government area. Wasiu left a wife and four children behind, and they have all also been added to his scholarship scheme.

Furthermore, the same benevolent act was replicated at Timothy’s family house, who was also a victim of the sad incident. Timothy left two children behind, and they are now on Hon. Peller’s scholarship scheme.

It would be recalled that immediately immediately after the incident on Friday, Hon. Peller had publicly condemned the action of the men of Customs Service, describing it as an unfortunate and disheartening occurrence that should never be allowed to reoccur.