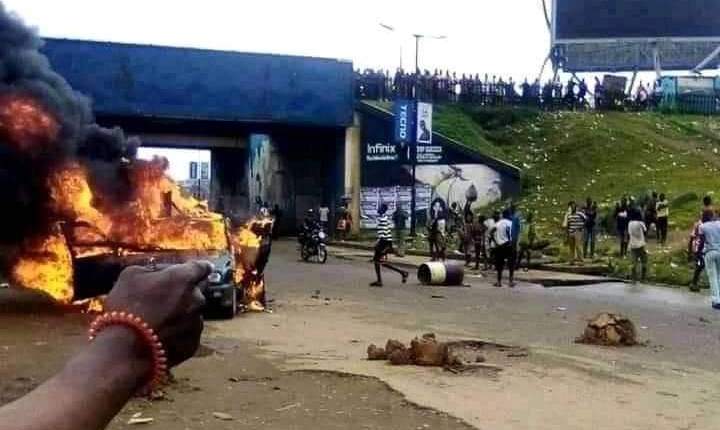 It was indeed a swift of event in Ibadan, the State capital of Oyo State yesterday. The horrible Incident of two policemen burnt alive in a broad day on Iwo road by angry youths who felt the need to do.

This incident, however, has sprung up surprises and bewilderment as people keep wondering about what could cause this unethical Incident. Recall that the State has been relatively peaceful after the deployment of ‘Operation Burst’ by the State government. More so, people have been going about their normal business as the EndSARS protesters have decided to suspend the protest with the mind to restrategise.

As your most trusted, reliable news source, necessity is placed on akedeoyo.com to beam the searchlight, through a painstaking, eyewitness research on what caused the ugly incident in order to give a first Information, and to further keep you informed about lastest developments.

In contrary to what was obtainable in some social media outlets since the incident occurred, our fact finding Investigations revealed that the incident wasn’t in any way connected with ENDSARS peaceful agitators, but rather was borne out of hatred and animus against Police officers in copied with the uncaring, nonchalant and reckless driving of three Police officers in their patrol van, which led to the loss of an innocent motorcycle rider.

The first salvo that caused the ugly incident at Iwo road yesterday started at about 1:30pm at Wema bank area of Gbagi, along Ife road, Ibadan. An eyewitness account has it that some Police officers who were on muftis were driving with their Patrol Van allegedly hit an ‘Okada’ Rider, who was reportedly dying on the spot. But these Police officers couldn’t bother to alight from their Patrol Van to check the damages their actions have caused. Instead, they speed up the Patrol van.

This action infuriated the nearby youths and trailed them. On getting to Iwo road, these Police officers alighted from the Van and torched it (according to an eyewitness), and ran to take refuge in the nearby houses having noticed that some angry youths were after them. For some moments, no one could ascertain the whereabouts of these Police officers until they started shooting

sporadically into the air from their hideouts. They probably might think the shooting would dismayed or scared the youth not to further search for them. But instead, the irrated youth intensified their concerted efforts in searching for them, as the shooting further gave them the clue of their whereabouts. The angry youths started moving from house to house, harassing, and at some points, beating the residents as a way of forcing them to reveal the whereabouts of these officers.

But as luck would have it, two of these officers were caught at about 3pm after much effort have been unleashed by these angry persons, while one of police officers escaped to an unknown destination. They were brought to the sight for sore eyes and burnt alive while many of the residents are still hospitalised as at that time we are filling this report.

Based on this foregrounded and eyewitness account narrated above, it becomes remotely untrue, and as well could be regarded as being economical with the truth to associate such horrendous Incident with EndSARS protests as the event leading to it was not in any way connected with the harmless, peaceful EndSARS agitations by well- meaning youths.

Just as the popular saying goes ‘A stitch in time saves nine, the quick-witted Response and timely intervention of the amiable Gov. Seyi Makinde at the scene helped to calm the nerves of irrated youth who were already on their way to foment more troubles by burning another Police Station.